A Case Study In Irony

Irony is one of those concepts that is difficult to define. In fact, it is one of the most misunderstood and misused concepts in the english language. Take the title of this blog, for instance. Very little posted here has anything to do with irony, and it certainly isn't popular. Isn't THAT ironic, though?.... Yes. Well, maybe. Ok, probably not. But I digress.

The truth is that this blog is in desperate need of an injection of irony to keep it's name honest and demonstrate that Terlet and I are not complete idiots who can't properly use the word irony. So I bring you a case study in irony tonight, in the form of a news story that captured my heart and demonstrates the concept perfectly.

The title is "Creationist Museum Employee Struck By Lightning".

For those of you unfamiliar with the creationist museum, it is run by a man named Ken Ham (not joking) and is located in the progressive mecca of Kentucky, USA. Their goal is to present a history of earth from a biblically-friendly perspective, complete with a recreation of a young earth style utopia. This means people riding dinosaurs. Seriously. I am not going to get into the simple irony of a "museum", which is a place that promotes art and science, being bastardized to promote the exact opposite. That is an example for another day. This Ham guy was featured in Bill Maher's documentary "Religulous" in which he scolds Bill for mocking the scientific inaccuracies in their exhibits by invoking celestial infallibility. And check him out. He looks like a bowl of laughs. 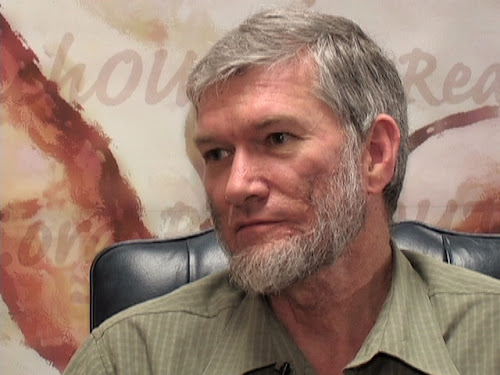 Well, last week one of his employees was kinda, but not exactly struck by lightning. He was valiantly trying to get museum visitors off of a zip-line ride attraction during a thunderstorm, and was blasted by an electrical charge from a lightning bolt, suffering only minor injuries.

Now, this sort of thing happens from time to time, and while rare, is not unheard of. Especially for those working outdoors on large metallic structures during lightning storms. But being struck by lightning is symbolic of a mortal who is out of favor from a deity, not just in christianity, but all the way back to zeus who wielded bolts of lightning like Phil Specter in a brothel with a revolver. So isn't this evidence of god's disdain for the rejection of reason and science? Isn't he lashing out at these peddlers of pseudo-science who knowingly reject the accumulated knowledge that mankind has painstakingly patched together since the stone age? Not according to Ken Ham.

“Well first of all, we certainly do say that ‘disasters’ and ‘personal tragedies’ are the result of God’s judgment–God’s judgement BECAUSE of our sin in Adam! Romans 8.22 makes it clear the whole world groans because of our sin,” He replied on Monday. “The fact we get sick and die is because of God’s judgment on sin! But praise the Lord, God had a plan from eternity to save us from the consequence of our sin–He paid the penalty for our sin and offers us a free gift of salvation (Romans 10:9).”

So I guess the fact that this accident occurred on their property WAS because they were being punished by god, but not for their half-assed attempt a weaving together science and creationism, but because Adam ate that fucking apple in the beginning of time! Holy fuck. That christian god sure can hold a grudge.

So the next time you are put on the spot to give an example of irony, just remember the story of the false prophet being struck by lightning. And by the way... Were you left wondering why the fuck a creation museum would have a zip-line ride on the premises? Because NO ONE wants to go there.