I recently had an opportunity to engage two of my interests when I combined my love of science with my rampant alcoholism, thanks to the product "Spike Your Juice".  I purchased this online for about $15 and got everything I need to turn six 64 oz bottles of juice into prison wine in just 48 hours!  This is a chronicle of my first batch, which was finished just last week.  Enjoy. 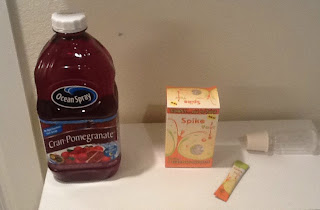 As you can see, here is my ingredients list.  I am using cran-pomegranate juice, but you can use any filtered juice with greater than 20g of sugar per serving.  And remember, junior scientists, cold kills the yeast so NO refrigerated juice, only room temp stuff.

The operation couldn't be simpler.  Just pour the yeast packet into the juice (keep in mind that this is not store-bought yeast, but has a sugary coating to boost reproduction and accelerate the fermentation) and replace the cap with the included gas lock lid, which allows the gas to escape without introducing additional unwanted bacteria.

Now I play the waiting game.  The instructions say it is ready after two days, but three days allows for more thorough fermentation leading to a much more dry and boozy wine.  And since we all know I am looking less for taste and more for shitfacedness, I opted for a three day brew.  It smells like cheap wine.  Because it is.

I decided to down it all in one night, as quickly as possible.  You know, for science's sake.  I used my favorite "Batman Forever" commemorative McDonald's glass, and it came out to 8 full glasses which I eliminated in about three hours.  It was surprisingly good, considering this is essentially the same product brewed in plastic sacks under prison bunks.  Did I get drunk?  Very much so.  I wish I could give a more descriptive account of the aftermath, but I topped off the wine with whiskey and managed to destroy the secure conditions of my testing environment.  I guess I will need to make more, maybe with a higher sugar content, and I might employ a coffee filter in the final stage.  In the name of science.  As a sidenote... if you ever plan to pursue any home experimentation I only ask that you heed the warning on the box:  Never replace the screwcap on your juice after spiking.  It will explode all over the place and leave your home smelling like the final round of a hobo orgy.  Seriously.
Posted by Hamtackle at 1/31/2012 07:31:00 PM No comments:

Subjected to the pressures of Washington and the liberal media, we at Popular Irony have been forced to break the top secret seal once again.  We introduce you to another member of our highly classified, elite, anti-terrorist unit, P.I. JOE.  Below is our newest soldier to be "unclassified".  Give the picture a click to view ShitStorm in all his full size P.I. JOE horror. 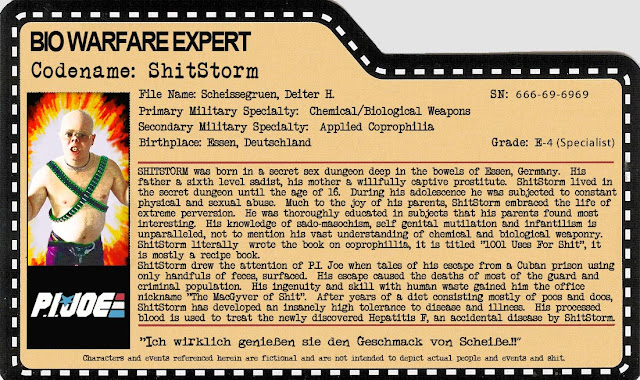 If it was the receptionist's job to make visitors feel welcome then she was failing miserably.  Vic Musket stood in the center of the room as the nervous woman cleared her throat to catch his attention.

"Mr. Stokely will see you now.  Please follow me to his office." She said, then began winding her way expertly through the labyrinth of glass walls and hallways to a set of tall oak doors.  It took all of her strength to wedge them open.  Clearly this building wasn't disabled-friendly.

Bert's figure cut a shadow that was considerably larger than Vic remembered from twenty years ago.  He gripped a double scotch in one hand and held the bottle outstretched in the other.  "Vic Musket.  I believe I owe you a drink."

"That's kinda why I'm here..." Vic paused to pull deeply from the bottle, stopping his host mid-stride as he was retrieving a second glass.  Bert realized he would never get the $500 bottle of scotch back.  "I really got my testicles tangled back in the city, and I could really use the help of someone with political connections.  As you mentioned... you owe me a favor or two..."  Vic pulled open his shirt to reveal a pink scar in the center of his chest, seemingly right over his heart, leading Bert to assume that perhaps he didn't have one.

"Well, the DA out there is my kid's godfather.  Anything you ask, consider it done."  Bert replied with the utmost confidence while sipping his scotch.  "What's the damage Musket?  Did you kill a whore, or something?"

"No.  But all the evidence says that I did."

"Jesus, Vic!"  The businessman said, dribbling scotch onto his silk tie.  "Are you fucking kidding me?  I'm not sure I can pull hard enough to get you out of a rape-murder!"

"I didn't fucking murder anyone, dammit!  And the sex was completely consensual.  Paid for, but consensual.  I'm being framed by someone powerful, so I need my most powerful ally.  Can you help me here?"

Bert was pacing back and forth now, knowing perfectly well how big of a shitstorm he was walking into if he decided to help Vic out.  He knew that this kind of shitstorm always gets in your mouth, but if you throw enough money at it you can at least avoid the hepatitis.  "I'm in.  But let's be clear... when this is done I never want to see you again."

A big smile came across Vic's face.  Once again the piss from the sky was turning into rain.  If there was really a God up above then he must be evil to look after a sinner like him.

Every couple of months, Hamtackle posts something very graphic or just plane disturbing.  That is perfectly fine.  It is a good outlet for his bloodlust and hopefully keeps him from committing atrocities himself.  But after those gruesomely hilarious posts, I feel the need to swim in the opposite end of the pool.  After yesterday's exceedingly gory, mangled hands post, I felt it was time for a bit of a palette cleanser.  So please enjoy this steamy pile of cute.


OOOOOH!!  The wittle ducklings are swimming in a bathroom sink!  Just look at the downy wittle angels.  Wittle schnookums!


Oh shit!  Not Corgi puppies!!  I am having an intense Cutegasm and I am making a mess.


OK, now I have gone too far.  A chubby asian baby?!  Fuck that little guy is cute!!  He is like a mini Michelin Man!


I hope this trip to Adorable Land helped chase the suicide bug away for another day.  Just remember, if you are ever feeling blue, somebody has it waaaaay worse than you.  Just look at yesterday's post.