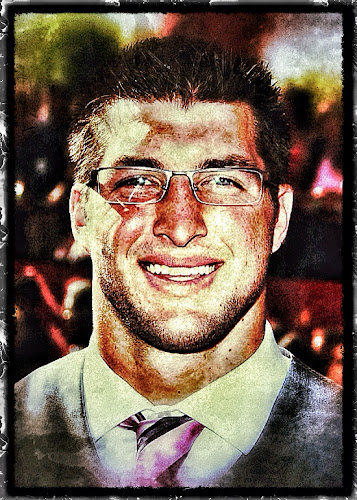 We all saw it tonight.  Jesus Christ turned his back on his most enthusiastic supporter in his time of need and allowed the Denver Broncos to be crushed in embarrassing fashion.  Word from within the religious insider circle indicate that Tebow had the endorsement of the son of God until as recently as last night, but had a "falling out" of sorts that shifted celestial support back to Tom Brady.

There has been rampant speculation about the nature of the disagreement, but general consensus seems to aim toward a failure to maintain a strict regimen of child sacrifices that has extended the Broncos season thus far.  At any rate it was refreshing to see the celebrated quarterback lay the blame for the outcome squarely at the feet of the almighty, ending a long time tradition of hypocrisy by athletes that dictates the Lord is only to be praised for victory, but never held accountable for failure.

The personal relationship between Tim Tebow and God has been built on an unstable foundation, as Tebow reportedly holds feelings of resentment due to his creation as a left handed heathen, and has been forced to appeal to the bloodthirst of Yahweh through the kidnapping and ritual murder of defenseless street urchins.  Back in his college days the display of bible verses during games in his eye black was translating into a Heisman trophy win and a national championship, but in order to get drafted in the NFL it took much more.  Tim Tebow ensured a first round draft pick by participating in a pro-life commercial that aired in the superbowl, and began a campaign to further his fame and fortune.

But the nature of his efforts to please God took a dark turn earlier this season when Tebow reluctantly agreed to sacrifice a lamb to get his chance to start as quarterback for the Denver Broncos.  Each subsequent victory was gained not through the hard effort and team cohesion of the Broncos, but rather by trading the life of one child per week.  This formula worked very well until late 2011, when Tebow took a hiatus from the sacrifice in an attempt to prove he could win by the merit of his skill and athleticism alone, but this resulted in a three game losing streak and a narrow division title victory.  Encouraged by an ovetime victory against the Steelers that featured a crippled Ben Roethlisberger at quarterback, Tebow chanced the playoff game by once again refusing to complete the sacrificial ritual.

While the recent reluctance to perform the slayings has excellent implications on the well-being of homeless children in the greater Denver area, it has not translated into the same level of success they enjoyed a few short weeks ago.  It is still unclear if Tebow plans to resume the dark ritual in the off season, but fans have their hopes up.