Bear Is Amazing And Noble Beast! 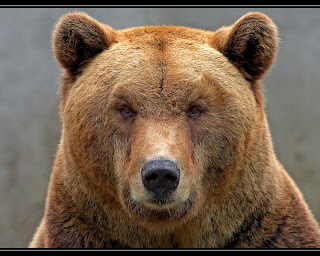 Bear and man has for many years been inseparable, since back in the times when man chase food with sticks and rocks.  Bear represents power, honor, and sexual virility to rest of the animal kingdom.  Here is bear being large and quiet.  He does not need to be loud because he is powerful, and he fears no other animals.  Look into bear's eyes.  Bear is looking back at you. 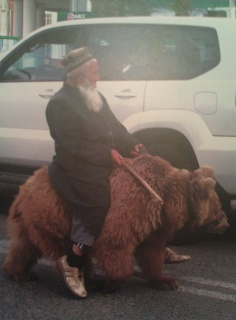 Many men owe their livelihood to bear.  Bear has given much effort and served well in many ways.  If dog was not so eager to please bear would be called man's best friend.  Bear can work for man as transportation, and works better than car because car cannot maul attackers, only run them over.  This man is very old because bear protects him in dangerous village.  He was certain to die many times if bear did not devour attackers. 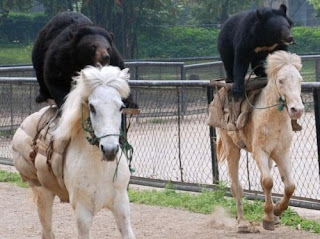 Bear is also excellent racing animal.  Although very fast themselves, bear prefer to race as jockeys.  Bear make excellent jockeys because they can speak to horse.  Bear tells horse "If you are slow I will eat you.  I am bear." and horse always run very fast.  Although some bear is very large, other bear are small and make good jockeys.  Look at super fast bear win races! 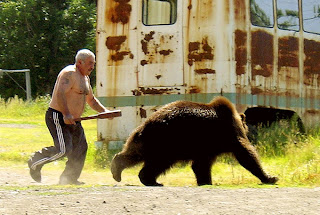 But sadly some bear hurt man.  Man is too bold when walking in bear territory and forgetting he is delicious.  When bear makes man dead many other men attack bear.  Bear is not used to attacks and runs away from aggressive man.  Man is very angry and chases bear with stick, hoping to make bear hurt or dead. 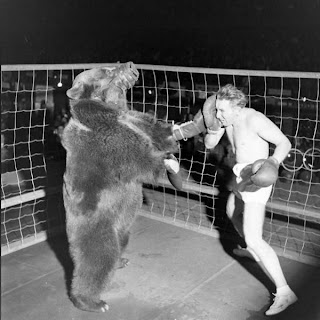 Men learn to enjoy hurting bear and tries to find new ways to fight.  Man covers bear mouth and claws and fights him.  Although very funny watching at the time, man changes to thinking this is cruel to bear.  Actors in movies and politicians make hurting bear not good anymore, and man stops bear-punching sports.  Now man only shoots bear, and only if he gets bear killing license. 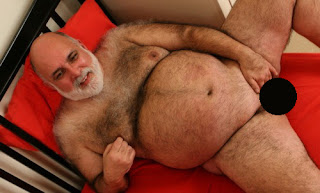 Far from wanting to hurt bear, man now loves bear.  Some man likes to pretend to be bear, have body hair and growl like bear.  Internet has many pictures of man-bear like this picture.  Man-bear shows how much happy he is.  He is very happy to be man-bear.
Posted by Hamtackle at 1/25/2012 08:18:00 PM