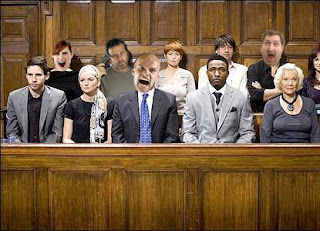 The judge gives you ample opportunity to save yourself the burden of participating in the justice system by asking several questions to the jury before selection begins.  The man in front of me said that he held a bias against the local police department because "they are all a bunch of ticket-mongers".  Another woman claimed that once saw a house burn down and it would be too much for her to serve on an arson case (how convenient).

These people are rookies.  The lawyers will see right through your objections and select you out of spite.  You have to appear willing to serve, and demonstrate that you would be a terrible choice for the jury.  I say that you wait for a bathroom break and then spark a conversation with a stranger.  Then loudly tell a racist joke, making sure the whole court can hear.  Bonus points if your joke targets the race of the defendant or judge.

Another great trick is to pick a person in the courtroom, if you are a man make sure it is a female, then just stare at them throughout the proceedings.  Whenever the court tries to get your attention shout loudly and act startled.  After a few outbursts one of you will have to go, and hopefully it will be you.

Reverse psychology will work in this scenario if applied properly, as well.  Act super enthusiastic to participate in jury duty, listen attentively and sit up straight.  Then periodically wink at the defendant.  You will certainly be confronted for tampering with the trial, so just deny any wrongdoing and repeat.  They will have to let you go.

For advanced tactics, spend the last twelve hours eating chili until you are sick.  Bark out a few five-syllable farts and the court will throw you out.  At first you may only be granted a bathroom break, but persist with the flatulence and you will win in the end.  Sneak in a stinkbomb for emergency assurance.

And there you have it.  A comprehensive list of proven methods to avoid your civic duty.  Thank me on the way out of the courthouse.
Posted by Hamtackle at 1/23/2012 10:00:00 PM