Any dedicated reader of the Popular Irony blog already knows that I made a once in a lifetime trip to Italy this year, and I figured that dead horse was in need of another posthumous bludgeoning, so here we have some of the artwork I acquired from various street artists. The twist is... none of these pieces were bought by any traditional means. In fact, not a single dollar changed hands for any of them! Now I share my secrets for how to grow your art collection on a pauper's budget.

Much of my time on this year's trip was spent in tuscany, which is known for it's rich farmland and endless fields of sunflowers. While wandering the streets of San Gimignano with some locally bottled wine and two loaves of heavy, fresh bread for that night's dinner, I came across an obviously talented woman showcasing her watercolors. I traded twelve fruitless minutes under her heavy skirt, but after managing only to disappoint her I gave half of one loaf of bread, leaving with this painting and a froth mustache that has yet to fully wash away. I will remember her fondly always.

While in tuscany I had the good fortune to spend a week in a private villa converted from a 14th century Medici stable house, with breathtaking views in every direction. While drunkenly trying to decipher the rules of a game of bocce I noticed another young male artist on the property painting our luxurious accomodations. I approached him with a large smile so as not to startle the boy, but once within twenty yards I fell upon him with fury. After beating him within an inch of his urchin-like existence I noticed the quality of his work. Lucky for him I accepted a trade of this piece for a thirty-second head start getaway, and in my drunken state I was unable to catch him on foot. 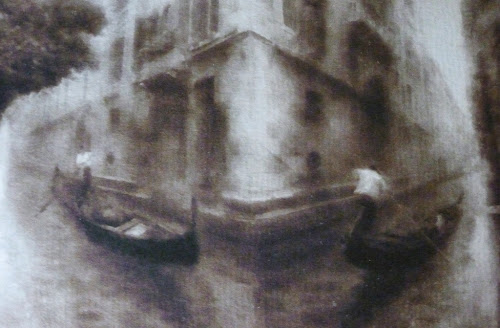 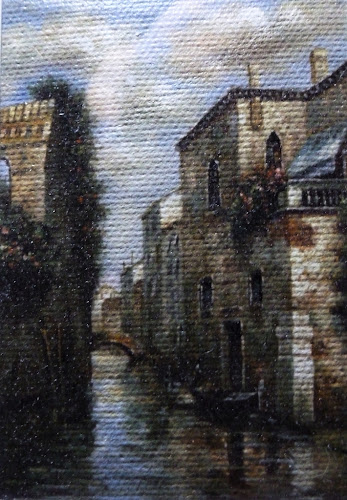 This small oil painting was being sold along the tourist-trap banks of the grand canal, where the crowds of germans and americans wash over every inch of walking space and clog the bottlenecks of bridges for as far as the eye can see. This painting caught my eye because it was being guarded by a severely disabled elderly woman who must have been working with the artist, perhaps related to him or her. I took the opportunity to snatch this painting and slip into anonymity amongst the crowd as she cackled her protests upon deaf ears. 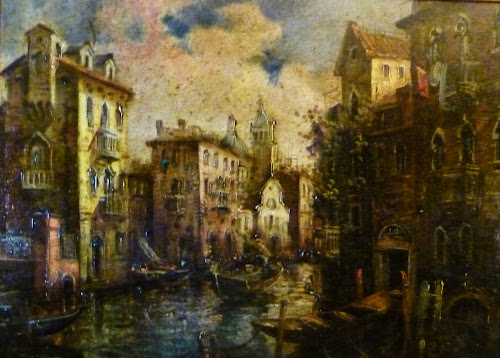 And finally I share my favorite piece. I acquired this in Rome, although the subject matter is clearly the canals of Venice. I was awestruck by the detail and quality in this large painting, and complimented the old man on his obvious skill. We discussed pricing for the piece, but I must admit I runed my leverage by showing such transparent fondness for it, and his asking price was far too high, so I reluctantly walked away. Luckily there was a police officer around the corner chain smoking with a submachine gun and leaning against his alfa romeo squadcar. I frantically explained in broken italian that I saw an elderly man sodomizing a toddler with his knobby, arthritic digits, and gave a detailed description. While the officer was administering a savage beating I was able to sneak away with this painting. It is the most prized piece in my collection.