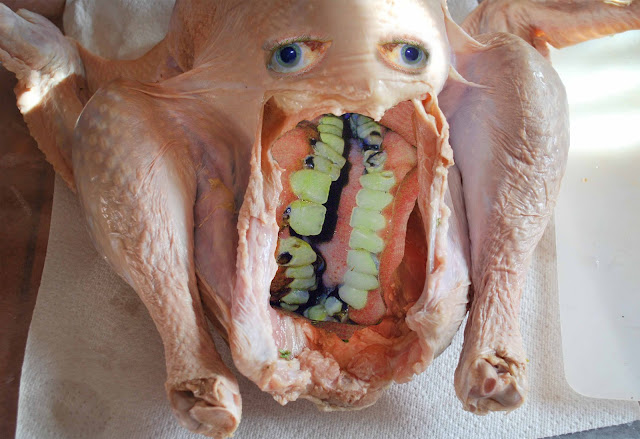 It is that time of year again when we as Americans assert our dominance over all of turkeykind. Most of us will sit around in the living room watching football while the dirty work is done, but there is something magical going on in the kitchen that we should all know about. Some of our thanksgiving chefs will be buying a pre-packaged turkey that requires only a quick removal of neck and giblets from the carcass, a quick washing, then the application of various breads and vegetables into the gaping maw of the bird by hand. But a few of us will be truly getting our hands dirty and slaughtering our own turkeys, reinforcing the bond between our primitive hunter/gatherer mind and the animals that are sacrificed for our well being. And as a local authority on turkey preparation I feel it is my responsibility to lead you through the less-than-pleasant parts of the process.

Now we all know how to actually cook the bird, but few know about the ancient art of ending it's life properly. The killing of the animal is quite simple, as turkeys are notoriously stupid and must be under constant supervision to avoid wandering through death's door on their own, but if you need a someone to hold your hand through this part let me offer you two words: large rocks. After plucking the bird it will be very difficult to tenderize it without damaging the delicate skin, so it is best to kill the bird with a bucket full of palm-sized rocks, which will soften the connective tissue of the meat and end it's life in one simple step. So pummel that animal and let's move on to feather-removal!

Plucking may seem like a difficult task, but this is where our modern world comes in handy. Just wrap the dead animal in 1-2 rolls of duct tape, grab the loose end of the roll, and swing the bird around your head until the centrifugal force unravels the delicious mummy. There! You've got a fresh and clean turkey corpse!

Before getting to the squishy offal within the animal you must defeat it's basic defenses which have evolved over time to have a psychological effect on the primary predator of the turkey, mankind. Your common grocery store turkey has been processed already, so don't be shocked when you learn the truth about the anatomy. The cavity that holds the guts in place is protected by a full set of human-like teeth and eyes, which must be removed manually before stripping the gums and proceeding with evisceration. Use a paring knife to peel back the gum line and make yanking the teeth a bit easier, and grip them with household pliers before removing with a twist and abrupt downward force. Make sure you have a solid hold of the tooth, because failure to remove the full root could make future consumption rather unpleasant for some of your guests.

Now you probably have noticed at this point that your turkey comes equipped with a pair of shockingly human-like eyes. Don't worry, as they are entirely non-functional and are only there to startle you. Do not hesitate in plucking them out with a tablespoon in much the same manner a some would employ a melon baller. The sooner they are not staring up at you the sooner you will be able to get past this unpleasantness. Now that this is done you are ready to complete the final step before cooking.

Few amateur chefs are aware of the strange anatomy of the turkey, but it is widely known among farmers and butchers that a turkey has roughly a quarter mile of intestines within it's bloated frame. It uses them to digest the bones of it's primary food source in the wild, mice and rats. So get a mid-size garbage bag ready and thrust a hand through the maw of the beast. Once the bowels are fully unplugged, grasp the bladder at the base and twist to avoid spillage. Once removed, simply yank out the lungs and spleen to complete the process and get to cooking.

From here, it is entirely up to you how you prepare your bird, from deep frying to slow roasting, the possibilities are endless. And since you took the animal's life yourself, you get the satisfaction of having bested one of mankind's most formidable foes. The domesticated turkey.

Enjoy your carcass flesh, and remember to be thankful that your genitals still function. Unless they don't, in which case you may want to kill yourself.