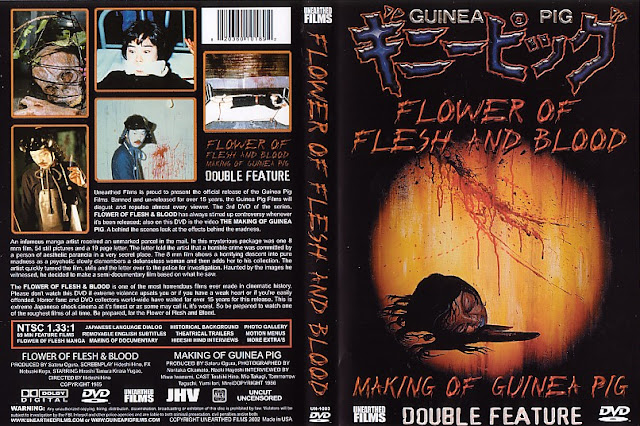 Welcome again to Films For Fiends, where I, Hamtackle, watch the most disturbing, controversial, and violent films ever produced so you don't have to! It's been a long time since I have weighed in with another installment, so I hope you haven't had to look elsewhere for you gorno fix. Enjoy!

The Guinea Pig series is a notorious collection of japanese horror films that are famous for their themes of sexual sadism and torture. I already reviewed the first film in the series, "The Devil's Experiment", and now bring you a run down on part 2, subtitled "Flower of Flesh and Blood". It claims the background of a video sent to prominent manga horror cartoonist Hideshi Hino by a misguided fan, who viewed it and then turned it over to the police before reproducing it in this gem of shock horror cinema.

Ok, this is clearly the horror version. The drugged girl awakens tied to a table, and a man dressed as a samurai stands over her and decapitates a chicken telling her "This is your fate!" as if that wasn't obvious by the act itself. Of course, in his defense, she might have just thought he was cooking her dinner. Japanese courtship rituals often mirror those of serial killers. Luckily for her the man keeps drugging her with some unknown injectable cocktail, and let's face it: if you are going to be rape/killed by a wacky mustachioed samurai, you're going to want to be as far from sober as possible.

And after a half-assed explanation of the artistic merits of his fetishistic torture, he gets right down to the nitty gritty by cutting off both of the girl's hands. I must admit, the effects are quite realistic, complete with grasping fingers after detachment. He then cuts off her arms at the shoulder with equally impressive effects. You see the cutting close-up, with minimal cutaways. He even employs the use of a carpenter's chisel to get through the shoulder joint.

It seems pretty clear now that this guy's plan is to disassemble this girl like a thanksgiving turkey, as he gets to detaching the legs at the knee with a crude, rusty hand saw. This flick would almost be believable if it weren't for the dramatic and shitty acting by the killer and the total lack of nudity. Pretty much any serial killer is going to be masturbating into the viscera of their victim eventually. It's kinda the point of the whole thing, I think. This guy doesn't even sport so much as a half-chub as he opens her stomach and removes the intestines. But then again, he is japanese, so who knows? The special effect guy gets bonus points for using animal guts al-la dawn of the dead. They make for a much more authentic experience.

The girl is then shown some mercy as the killer literally drops the axe on her, separating her head from the body (or is it the body from the head? I'm not sure.) We are then treated to a close up eye removal via spoon, and their seductive kissing and licking by our psycho, and then the film cuts to him sitting on the bloodstained table smoking a cigarette. Maybe he jerked off into the corpse off-camera. Good thing. We showed up to watch hardcore violence, not disgusting and taboo sexuality. The film ends with the killer showing off his collection of severed limbs and preserved eyes, along with some additional half-assed poetry.