Can you believe it!?  PopularIrony.com is 2 years old, today!  It seems like only yesterday that Hamtackle was released from that State funded "care" facility.  He wandered the streets, opened mouthed and uninspired, until he was able to innocently obtain a lightly blood stained laptop.  The free internet access at the local Carl's Jr granted him access to the world of the internet.

That's when he started http://hamtackle.blogspot.com/.  It was a simple, free Blogger blog, but it brought him purpose and a facsimile of human joy.  Hamtackle slapped his thalidomide flippers against his keyboard, creating poignant observations and wrapping them in utter filth.  After 2 weeks of nonstop blogging, Hamtackle was joined by one other, Terlet.

Terlet, an inherent coward and mysophobe, was forced into blogging via threat of a sharp, poop dripping stick.  One afternoon, Terlet was walking home from work (the bus is too disgusting), making sure not to step on any cracks in the sidewalk, when he was accosted by a drunken, Irish monster.  Hamtackle rushed and cornered Terlet, brandishing his shit stick.  Terlet, eyes already streaming with tears, shrieked and curled into the fetal position.  Instead of the usual "take the money and rape them" maneuver, Hamtackle demanded Terlet's dedication to his blog.  Terlet, piss-stained and weeping, agreed.

Terlet rushed home and purchased the domain PopularIrony.com.  The blog has been updated daily ever since.  The moist tapping on Terlet's duct tape and sterile plastic covered windows, reminds him of his fear based responsibilities.  The constant terror of retaliation from the shit stained drifter, kept both monster and coward motivated.

I guess I am supposed to give a gift for an anniversary.  The googles say that the modern gift for a 2 year anniversary is China.  So here is former president of China, Jiang-Zemin in a very Popular Irony political pose. 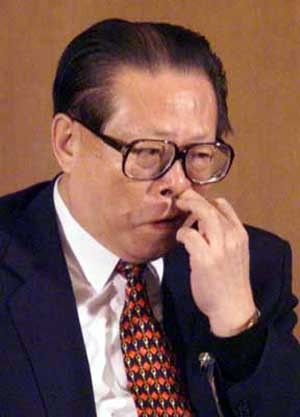 Congratulate us in the comments.  We deserve it.