Hey folks, Terlet here.  Once a month, I receive a shipment of comic books and comic book related merchandise from the Discount Comic Book Service, http://www.dcbservice.com/.  Oh, what a lovely day it is!  Do you know why?  Because TODAY is fucking comic book day!  Oh joy!

In the last couple of years, I have been trying to wait for the trade paperbacks (collected editions) rather than purchase the monthly 22 page floppy comics.  I've got box upon box of floppys clogging up the basement.  Oh, but the trades, the trades go on the bookshelf.  So much nicer to display and access than cardboard long boxes.  I have become acclimated to waiting for 6 months to a year after the floppy is released to purchase the trade and finally read the story.

During my 25 years of comic book "collecting" I have not taken very good care of my books.  Don't get me wrong, for the first 10 years, I bagged and boarded everything.  Then I discovered that all of my 70's 80's and 90's comics weren't worth shit!  They print so many of the fucking things that there is rarely anything of any lasting value.  Once I read them, they go into a box and get shoved into the crawl space.

I know, I know, these days there is an occasional Image #1 that goes for a shit ton on Ebay.  There are some low print run comics that are unexpected successes.  There are still valuable, collectible comics being produced.  That being said, I buy what I want to read rather than what I think will be "collectible".  Sometimes to my disadvantage, I read a first print of Chew #1 in the fucking bath tub.  I thought it was going to be worth toilet paper like all of the DC and Marvel comics I buy.  Whoops!

Well, let's see what we got.

First up, the floppies.  Yes, I still buy the occasional floppy.  How would I know if I wanted to wait for the trade or not. We got Marvel Comics - A+X.  One of the pseudo-reboot/jumping-on-point thingys for Marvel NOW.  I used to be a huge DC nerd.  I knew that universe inside and out.  Then DC eradicated all of continuity last year with The New 52!  I was excited for it, but it's not for me.  All of my copious DC knowledge is now moot.  Tim Drake was never Robin?  Fuck me.  I'm glad Marvel is not erasing their in-comic history.  Makin' me a Marvel Zombie and shit.

Then we got a He-Man spinoff comic.  The Origin of Skeletor.  Why the fuck not?

I got the DCBS exclusive cover of Judge Dredd #1.  Judge Dredd is pretty damn entertaining.  This is the first time I have seen Judge Dredd published by IDW.  It could be interesting or it could be an embarrassment.


Next up we have the DC and Marvel half of the trade paperbacks. 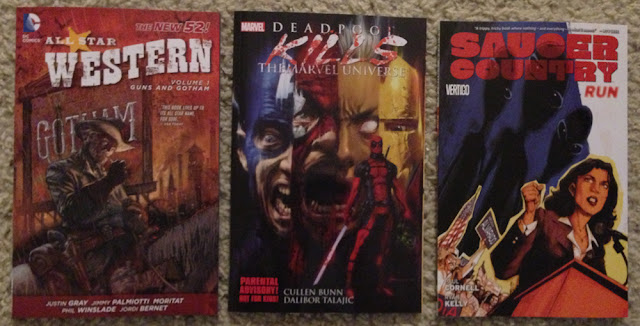 One of the only DC titles I have been looking forward to recently.  All Star Western.  This trade contains the first 6 issues of the monthly floppys.  It's motherfucking Jonah Hex in an old west Gotham City.  What more could you want?

Next is Deadpool Kills The Marvel Universe.  It is an out of continuity story that is not safe for kids.  In it, Deadpool murders the entire Marvel Universe.  Yup, that's right.  Captain America, Thor, Iron Man, Wolverine, all fucking DEAD!  I am looking forward to it.

I read the first issue of Saucer Country several months ago.  While I was not impressed by the first issue, I will buy almost anything by Paul Cornell.  He's just good.  This is about a lady running for president and being abducted by aliens, I know, absurd right!?  A woman president.

The Strain by Dark Horse comics.  It looks like the script is by Guillermo Del Toro but the comic is by Davip Lapham.  It's a new take on survival horror that is supposed to be a trilogy of books.  It's kinda a vampire/Zombie/disease monster comics.  Infection spreads, yadda yadda, infectious tongue stingers, etc, worldwide epidemic blah blah blah.  Looks awesome.

Then it's Godzilla.  IDW recently acquired a partnership with Toho co..  So now they are publishing Godzilla comics like a motherfucker.  Some are good, some aren't.  I don't know which camp this one falls in.  Either way it should hold me over until that gorgeous Godzilla Half Century War is released.  That shit is drawn by James Stokoe.  That shit is going to be amazing.  This one looks.... OK.

Ragemoor by Dark Horse comics looks awesome.  The interior is in black and white but it only adds to atmosphere of the book.  I read the first issue and really enjoyed it.  Creepy ancient living castle and the goings on inside.  Good fun!

Well that's enough of that!  I gotta get to reading.  See you next month!