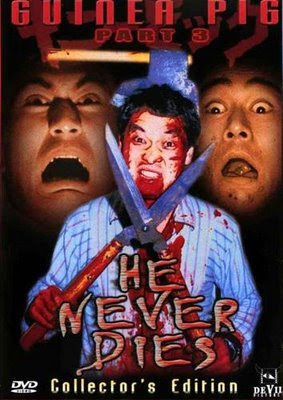 It's time again for me to help our readers to vicariously experience the pale, white underbelly of shock horror cinema through my desensitized eyes. Tonight I bring you the third film in the Guinea Pig series, "He Never Dies". I am starting to develop a soft spot for shitty, gory japanese flicks, and judging by the title this one promises not to disappoint.

The opening breaks from the series' norm of establishing some kind of documentary-style realism in the story, although it is presented as fact by some english speaking presenter because, you know, white people never lie. Just ask the indians. But any illusion of reality is shattered by the format which tries to make you forget that a guy filming himself in his apartment wouldn't have fades, panning shots, or angle changes.

We greet our nameless protagonist in the act of slashing his wrists with a box cutter. But what drives a man to this kind of desperation? Glad you asked. He works in some stereotypical cubicle farm circa the early 1990's, complete with overbearing and demanding boss. His coworkers shit all over him and don't socialize, setting the scene for either a suicide case or a workplace spree-killer. But first he takes the natural approach of skipping work and becoming a shut-in. Been there. Then after deciding that his colleagues have forgotten about him, he decides to kill himself. The flick then showcases its amazing special effects by showing the blade cutting deep into his wrist, lifelike blood and sinew visible through the wound, but after some tense moments... nothing happens. The bleeding stops, and our anti-hero proclaims that he must be immune to pain, jamming his fingers into the slit and digging deeper.

Now, after discovering that you are impervious to pain and death, what would you do? Become a high-priced political assassin? A movie stuntman? A cage fighter, perhaps? Not this guy. He decides to push the limits on his body's invulnerability by severing his hand at the wrist and slicing his throat. Luckily he is able to retain some basic use of his hand after duct taping it back on, and decides to reach out to one of his work contacts to get more implements to test his physical limits with, namely some gardening shears and a hatchet, which he has delivered to him in the middle of the night.

When his former work buddy shows up he wastes no time in giving a bloody exhibition show, gutting himself hara kiri style and throwing his intestines at the screaming man until his body cavity contained only a rib cage and spinal column. Strangely, the movie ends when a woman enters the apartment to find the protagonist reduced to only a wise-cracking severed head on a table, and immediately begins cleaning the gore from the room for an unexplained reason.

Ultimately this movie was a big disappointment. I have come to expect brutal and relentless violence from this series, but this sequel was far more lighthearted and tame by comparison. Gone are the dark themes of murder and torture, replaced with self-mutilation by a character that is unable to even feel the pain. And can someone please explain to the producers that I cannot maintain an erection when you keep putting wacky hijinks in the middle of the gory scenes? Damn. I had high hopes for this one.