What Are You Lookin' At? 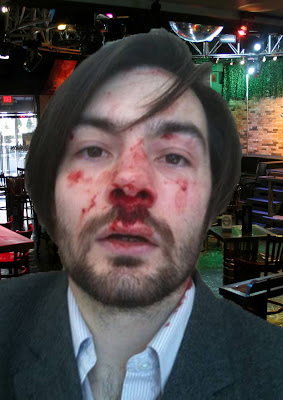 Hey! You got eye problems, friend? Cuz you been giving me the stinkeye from across the bar for long enough to get on my nerves, mister! Fortunately for you I am in a pretty good mood today, so if you spit out a few apologies I might let you out of this place with all your teeth. So what's it gonna be? Swallow your pride or swallow your blood?

Oh, we've got ourselves a tough guy here, eh? Just cuz you are a foot taller than me doesn't mean I won't beat the everloving shit out of the unconscious sausage sack you call a body! See these shoes? One size twelve and one size ten... The last guy that gave me a look like that took home two of my boot sizes up his turd-cutter!

Whoa! Don't put your semen-soiled hands on me! You know, if your momma fought like that she would have been able to fend off that homeless gypsy rapist that you call a father! And then where would you be? Boiling in some dna soup inside a hobo's sweaty danglers, that's where! Now either sit the fuck down or take that first step towards becoming a Stephen Hawking impersonator! I'll tell you what... Buy me a few beers and I won't make you toss my peanut butter salad in front of your lady friend, alright?

Ah, I see. You think that pouring a beer over my head is enough to scare me off! Well I'm made of tougher stuff, asshole! I've been in the fucking streets, man! Back in the hood in Omaha we used to butt-pound punks like you and throw the dripping leftover filth into the gutters to rot! Now go grab me some towels from the bartender and we'll call it even, unless you still want to make the mistake of a lifetime... Well, DO ya?

Hey! Hey! What's with all the aggression, dude? I didn't do shit to you and you think it's cool to just punch me in the fucking nose? Look at this shit! I'm fucking bleeding here! Oh man, you don't know how lucky you are that I was "born again" after my last run-in with a knucklehead like you... I'm a better person now that I am saved, and I might actually feel bad if I kicked your ass into some kind of unnatural retard coma or something! Now let's put this bullshit behind us and if you pay the drycleaning bill to get the blood out of my jacket then we're cool, alright?

What? There's no way I'm gonna suck your dick in front of all these people! You have got to be shitting me! I mean, the only reason you are still standing right now is because I have the decency to let you keep that ugly head on your shoulders! Whatever, dude. I am fucking out of here. Get the fuck out of my way... Oh, not gonna let me leave? Do you know what you are getting yourself into? Look. I'm gonna do you a big fucking favor right now. I'm gonna do the christian thing and turn the other cheek, and save myself the guilt of nearly killing you. Now unzip your pants and let's get this over with...