So today was the final day in the eight year reign of Pope Benedict XVI, and along with a bitchin' new pad down at the nun's living quarters he gets a new name: Emeritus Pope Benedict. And although he leaves under a veil of suspicion surrounding some seemingly sinister secrets leaked by his former papal butler, and with the distinction of being an ex-nazi child molestation advocate, he does not leave with an unparalleled level of lewdness for Popes in general. Tonight we take a quick look at the Catholic church's long legacy of perverted and lustful Popes.


Pope Leo VII (d. 939 CE), having served only three short years as Pope back in the crazy no-holds-barred years of the 10th century, died doing what he loved most. To be more specific, he died while fornicating. There is very little by way of details regarding his death for a variety of reasons including a lack of reputable and critical outside journalism during those days, and also because the church doesn't fucking want you to know about all the fucking they have been fucking around with when they judge everyone else for their own habits regarding fucking. That's a lot of fucking. And it doesn't stop there.

The 10th century was somewhat of a golden age for fornicating and adulterous Popes. In fact there are two other Popes that both died the same way and for the same reason. Pope John XII (d. 964 CE) and Pope John XIII (d. 972 CE) both met their end at the bludgeoning hands of jealous husbands who objected to the papal pumpin' that was being "thrust upon" their wives. One wonders why when the church suffers the indignity of a sex scandal resulting in the murder of their Pope, that they then elect another Pope who decides to call himself BY THE SAME NAME less than a decade later, and then they are surprised when he has the same penchant for boning other men's wives! Wonders never cease.

But my favorite fallen Pope is the last on my list, Pope Paul II (d. 1471 CE). This guy was WAY ahead of his time, and would have fit in with the modern church quite nicely. He didn't have problems "coveting" his neighbor's wife, oh no. He wasn't sent to meet his maker in the throes of passion with a forbidden mistress. And there was no shameful political secret that drove him from the ranks of the holy. Pope Paul II had a heart attack while on the receiving end of a particularly enthusiastic page boy sodomy session. Maybe this is why the Catholic church is so slow to remedy the problem of child diddling within their circle. They have a long rich history of shameful sexual practices by their #1 guy that FAR overshadow some hasty groping and kiddie fucking by some lowly priests and bishops. In the eyes of papal history these neo-pedophiles are simply amateurs in the most common of the deadly sins. Lust. 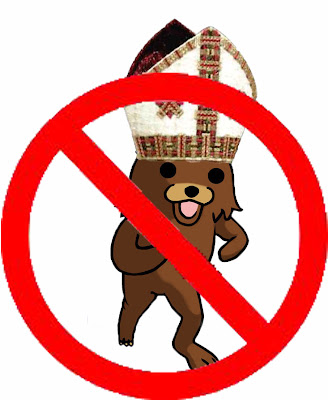