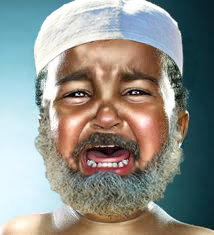 I have spent a good deal of my spare time offending christians. I consider those who identify themselves primarily by their religion to be dangerously ignorant, but since I live in america I generally only have direct contact with christians. And despite all my efforts I have never been threatened with physical violence. The truth is, violence among religious faith in the face of threatening speech only gains widespread acceptance among muslims.

Before I call down the wrath of liberal outrage, hear me out. I recognize fully that institutionalized violence is a long-standing tradition of virtually all religions, particularly christianity. And the jews don't get to play the victim anymore either, now that they attack civilians in palestinian settlements with nazi-like cruelty. But in this age of instant worldwide communication most religions have learned to develop a rather thick skin. They recognize that there is such a thing as an "internet troll" that will spew inflammatory statements specifically to get a reaction, and these "trolls" don't represent any real group of people but themselves. And if you"feed the troll" by reacting, you play right into their hands and give them an undeserved level of power.

And this is what we are witnessing today across the muslim world with protests in yemen, saudi arabia, iraq, libya, egypt, and so on. I realize there is a majority of muslims in the world that understand how the internet works and would never commit an act of violence in response to some inbred/illiterate douchebag's shitty youtube movie, but they aren't the ones getting any press right now. And it's not the media's fault. If the leaders of the arab world spoke out and proclaimed these protests to be counter-productive and embarrassing, their statements would certainly be front page news. But every one of them condemns the violence while simultaneously supporting the cause. I'm not saying they need to go out and round up protesters for prosecution, but you would be surprised how far a little ridicule goes towards deflating a meaningless movement.

It is even more offensive that the arab world chooses this idiotic point to gather up arms and take to the streets for. What about forcing women to wear beekeeper suits? How about the routine lynchings for people who wear revealing outfits or have the nerve to be born gay? They live in a part of the world with crippling social and economic problems and seem to have forgotten the massive support gained from the western world when they stood up for their interests during the arab spring uprisings. I was inspired and encouraged by those protests, and thought the muslim world might be climbing their way out of stone age mentality that they have been burdened with for so long. And now this shit.

These riots are a perfect demonstration of what happens when a culture overpopulates the intersection of religious fervor and ignorance. And the same problem exists here in the states, but most of us have the good sense to ridicule those people when we come across them, like when Pat Robertson wanted to start a christian crusade against the teletubbies for spreading the gay agenda. It's laughably irresponsible. Attacking an embassy in response to a youtube clip is the moral and intellectual equivalent of breaking into a person's home, raping their daughters, killing their dog, then burning their house down because they called you a "pussy" on facebook.

I only see two options to resolve this mentality, as the success of this particular internet troll will certainly inspire hundreds more to incite violence among these overly-sensitive childish protesters. They will either have to get the sand out of their collective vagina (not easy in that part of the world) and adopt the "joke's on you- I'm the one going to paradise!" attitude practiced by most other religions, or someone is going to have to revoke their internet privileges. Because when a baby starts misbehaving and breaking their toys, mommy and daddy have to take them away until they mature a bit.