The Problem With Aircraft 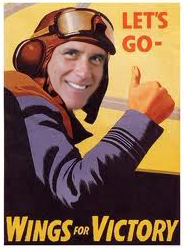 We can all breathe a sigh of relief now that we know that the potential next first lady, Ann Romney, is safe and sound after her flight had an emergency landing in Denver after some elecronic difficulty. I'm sure we can all agree that situation would shake even the strongest among us, and I wouldn't wish that kind of stress on anyone. But now that the crisis is over we have a new statement from Mitt Romney that raises a very serious question about airline safety that has been somehow overlooked since the advent of commercial air travel. Could it be that our next president may have saved countless lives by raising concern about a glaring oversight in airplane design? Read his remarks below to decide for yourself.

"I appreciate the fact that she is on the ground, safe and sound. And I don’t think she knows just how worried some of us were. When you have a fire in an aircraft, there’s no place to go, exactly, there’s no — and you can’t find any oxygen from outside the aircraft to get in the aircraft, because the windows don’t open. I don’t know why they don’t do that. It’s a real problem." - Willard Mitt Romney


Son of a bitch! He is right! All this time I have been flying in planes and I never once noticed that the windows don't open! I mean, what if we needed more oxygen? Maybe some terrorist releases sarin gas in the bathroom and we need to renew our clean air supply, then what? And what the fuck are those stupid oxygen masks for that the flight attendant goes on about before takeoff? Did they seriously put oxygen masks in the plane and STILL not realize that all our problems could be solved with a simple latch, or maybe even a screen door?

Wait a second... I'm starting to remember something else the flight attendant was talking about... Didn't she mention that the oxygen masks would self deploy in the instance of a dramatic decrease of pressure in the cabin? And come to think of it, I'm pretty sure that the air is kinda thin at the cruising altitude of over 30,000 feet. Hold off on the medal ceremony for single-handedly saving lives by revolutionizing aeronautical design, folks. It appears Mitt Romney hasn't demonstrated his qualifications as an engineer, but may have just pointed out that he is retarded.

How could it be that a harvard-educated, bilingual, wildly successful businessman doesn't know that airplanes must maintain cabin pressure to prevent the loss of oxygen? He attended public high school for years before going to private schools, and is young enough to have been exposed to the concept of commercial flight for his whole life. And any high school student will tell you that opening a window on a moving plane is a fucking horrible idea. But I don't buy that Romney is THIS stupid.

Perhaps he has always lived with incredible wealth, and never was exposed to commercial flight where the attendant clearly explains all about cabin pressure. Think about it... He might only know air travel from the perspective of a private jet owner, where the in-flight staff don't interrupt your caviar brunch with silly safety announcements. Is he that far removed from the average person that he just hasn't shared such a basic experience with the rest of us? I think so. Either that, or he really is a robot with no need for silly human things like air.