The Story Of Kim, The Littlest Tyrant

Yesterday the world lost yet another eccentric, egomaniacal tyrant in Kim Jong Il.  Having recently witnessed the fall of Moammar Gadhafi I am confronted by an irrational longing for insane and evil international supervillain of years past.  So as a respectful send off Popular Irony offers a short biography of Kim Jong Il.  Enjoy.

As we all know, Kim Jong Il was born at the foot of Mount Baekdu on February 16 1942 under the beautiful celestial phenomenon of a double rainbow and the spontaneous inception of a new star in the heavens.  And from these humble beginnings he rose to obtain the simultaneous rankings of Supreme Commander of the Korean People's Army, Marshal of The Democratic People's Republic of Korea, Chairman of the National Defense Commission of North Korea, Great Leader of The Democratic People's Republic of Korea, General Secretary of the Worker's Party of Korea, and the Chairman of the Central Military Commission.  And you would never know it by looking at his modest garb and simple fur hat.  How's that for modesty?  And considering he had some of the most fabulous hair in the known world, the fur hat speaks to his "regular guy" personality.
Much has been made about the glorious claims made about the man, but there can be little doubt that his legendary exploits are genuine, and have been dutifully documented by the North Korean media.  For instance, did you know that Kim Jong Il doesn't defecate?  Or that he once attempted golf, but was bored by it after hitting 11 holes in one and ending up 38 under par?  It is also a widely known fact that Kim Jong Il sparked a fashion trend the world over and was the modern pre-eminent international authority on the internet.
And let us review the list of commercial successes that have made North Korea a shining example of the possibilities the western world can aspire to:

﻿In his short existence on this planet Kim Jong Il overcame incredible odds and oppression by the United States to flourish as the economic powerhouse it is today.  And although his star burned too bright for most of the world to appreciate, and he certainly made some enemies throughout his political career, his struggle against the evil empire of the United States of America was greatly exaggerated as many government sponsored posters were misunderstood to be anti-American propaganda: 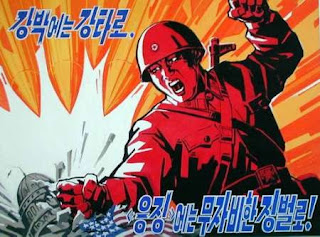 This work of art has been widely misinterpreted to call for the demolition of the American capitol by the North Korean red army.  The artist is actually trying to convey a sense of infatuation with the US by displaying the frustration his country feels in falling behind international standards of human rights, displaying the heavy hand of diplomatic negotiation damaging North Korea's international influence. 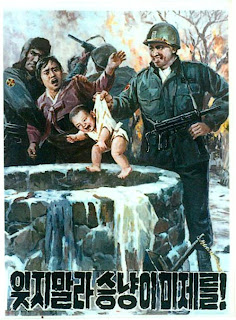 This image has often been mistaken as a propaganda piece implying that US troops committed atrocities against the people of Korea during the Korean war.  In actuality, this image shows how troops were able, on occasion, to save the innocent children from certain danger.  In this case a dangerous open air well.  The Americans were well appreciated for their altruistic efforts, as indicated by the joyful expression on the face of the mother. 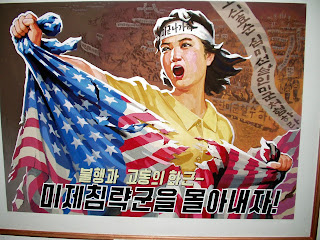 And here we see a popular political piece that has received much criticism by the uniformed viewer for it's apparent display of contempt for the American flag.  Truth be told, this image does not show a vengeful North Korean subject attacking democracy, but rather a hopeful youth with visions of the glorious annexation of North Korea by the United States to create a new American State!  She eagerly disposes of the current flag to hep usher in a new era that includes the newest 51st star!  Go America!


So before you join your friends or coworkers in ridiculing the fallen icon, just remember how great and influential Kim Jong Il became, and mourn the loss of a great leader.
Posted by Hamtackle at 12/19/2011 08:44:00 PM