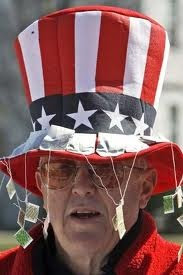 Hello again, fellow under-educated misogynists. Willard "Teabag" Chinsley here with another (belated) installment of Bible Belt Babble, bringing you the honest truth you can't get anywhere in the lamestream media. Tonight I will be covering the gas crisis caused by our commander-in-thief, tackle the voter ID issue, and explain why everyone should just leave poor Rush Limbaugh alone. So without further ado, let the indoctrination begin!

Like many of you I am often confused by the math that analysts use to explain how our economy is slowly recovering under "president" Obama's watch, but not every math problem can be solved by using your brain. Can't any of the lefties understand that there is no possible way for our economy to be improving if the price of gas is so high? I filled up the other day and got ten gallons for $42.00. Now I don't have a calculator handy, but that is like ten bucks a gallon! And the last time I checked the price of gas is mandated by the executive branch, so how can Obama not be at fault? I can't wait for president Newt Gingrich to take office so he can make good on his promise to issue an executive order from the podium after swearing in to make gas $2.00 per gallon. That will be the nail in the coffin of this failed administration and final proof that Obama is exploiting America to secretly help his muslim buddies over in Iraqistan.

I have been hearing a lot of gum-flapping by the libertards on tv about how much they hate the new voter ID laws that are popping up all over the country. Now if that wasn't reason enough to support this legislation, I will explain why these laws are necessary. You see, without requiring a person to present ID at the voting booth you will be allowing EVERYONE to vote. This includes women, minorities, snobby college students, and all the other riff-raff. Now if you think that is a good idea then just look at where the last election got us: a black guy. So not only is it a good idea to force everyone to prove their identity, but we should have teabagger representatives at every poll site with the authority to "hold" voter ballots for any voter that appears suspicious/non-white pending further investigation. You can never be too careful when it comes to denying constitutionally protected rights.

﻿
﻿There has been a witch hunt going on in conservative talk-radio, and Rush Limbaugh is in the eye of the storm. The liberal media has set their sights on him after manufacturing a controversy over some perfectly reasonable comments he made a couple weeks back about some whore that was asking congress to subsidize her whoring. Now Rush has lost over 140 advertisers, and his parent company has suspended all advertising on his program for two weeks. Is this what our country has come to? Am I to believe that a man can't express his general hatred towards women without people being outraged? Not in MY America. So let's all show our support for Rush by greeting and addressing all women we meet with a slap and a request for a sandwich. You will improving your standing as a strong male with your coworkers and family, and you just might save a righteous freedom-fighter in the process.
Posted by Hamtackle at 3/13/2012 11:12:00 PM