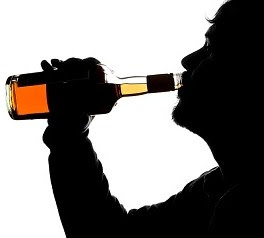 Bert came flying past the elevators and turned the corner just in time to see Vic smashing a full bottle of whiskey over the head of a much larger man, dropping him in the process. The lawyer was under a table, cowering in the face of the violent display. The fight wasn't over, but three men laid on the floor now with two others still looking to go home wearing at least some of Vic's blood. Bert darted past the men and grabbed the lawyer by the shirt, dragging him out of danger.

"What the fuck happened?" Bert screamed through the commotion.

"I don't know! Vic ordered a whole bottle and we started matching drinks, then I turned my back for six seconds and some guy started shouting at Vic about his wife. I didn't even have time to get out of the way before the guy threw a bar stool at us. I think I have a goddamn concussion!" The lawyer was nursing a visible bump on the side of his head.

Bert heard enough. He wasn't about to let Vic face another bar fight alone, not after he spent so many years regretting the last one. He charged back around the corner and tackled the first person he saw that wasn't wearing a filthy overcoat, and toppled to the ground with the man underneath him. A heavy boot came swinging past his face into the head of the man he took down and Bert felt him go limp underneath. He looked up to see a grimy hand extended toward him, and as he reached out to it Vic lifted him easily onto his feet.

"I'll be damned. Twenty years can do wonders to a man, eh Bert?" Vic was laughing despite his nose being clearly broken and laying flat against his face. "Where's the lawyer? He should probably settle the bill so we can get the fuck out of here."

"You sonovabitch! You pulled your cock out in front of my wife!" A man on the ground was mumbling through a broken jaw, only one side moving while the other dangled disobediently near his collarbone.

"Hey asshole, she ASKED to see it. Not my fault she was curious to see what a real man looked like. Maybe if you..." Vic's comeback was cut short by the fat, stubby hands of the mexican lawyer, who wasted no time yanking Vic out through the lobby and into the elevator.

"Jesus Christ, Vic. How the hell am I supposed to believe you didn't kill that whore after what I just witnessed?" The lawyer spat at him. Vic opened his mouth to speak, but held back a response as he realized how solid his logic was. "Now we had better talk quick, because that bottle is on my room tab, an it is only a matter of time before the cops come knocking on my door. Now here is what you are going to do, and it's non-negotiable. You will take a flight back to the city tonight and turn yourself into the police..."

"Like fuck I will." Vic interrupted. "What the hell good are you? I could have done that a week ago and saved us both a lot of time."

The elevator doors opened and the lawyer led the two men down the hall. "Shut up, Musket! You won't be in there for even three hours. I have spoken to the DA in your district and he will set your bail at $250k, which will be promptly paid by your good friend Bertram here." Bert swallowed audibly. "No worries. You will get your money back. I just need to buy us some time to mount a defense case. By the looks of it, this shit isn't going to be easy.

The lawyer opened up a door and revealed a beautiful suite, much nicer than the penthouse Vic was renting back in the city. After pulling some papers out of a dresser drawer the lawyer looked back to see Vic opening a fresh bottle of cognac.

"What? My last bottle got broke..." Vic said sheepishly.

"Take these. Two business-class tickets back to the city, leaving in... four hours. I suggest you get the fuck out of here, before you end up costing your friend even more bail money." The lawyer smartly gave the tickets to Bert. "And they won't let you on the plane if you are staggering drunk."

Vic guzzled down several mouthfulls, setting the bottle back on the liquor cabinet. "Fine. Then let's go."

The lawyer picked up the phone. "Take the service elevator. I will send someone up from the front desk, I will just tell them you are a famous client of mine that wants to avoid being recognized. That way you can avoid marching through the crime scene downstairs in the bar."

Vic was impressed. Maybe if he had a guy like this on his side ALL the time he wouldn't get into nearly as much shit as he did. But then again, some of his fondest memories end in blood being spilled...