The End is Nigh (Vic Musket Part 9) 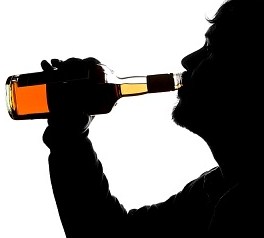 Vic dabbed at his bleeding throat with an old pair of his underwear, making a rare attempt to appear presentable for his upcoming meeting with uncharacteristically esteemed company. He wasn't even drunk. He had downed only enough booze to curb his shaking, and if he hadn't slashed his throat into ribbons while shaving with broken glass he would look almost respectable. There was a big payday coming for him soon, and although every ounce of his being was celebrating the coming excess of women and liquor, there was a place in his mind that thought this was his only chance. What if instead of checking out a fine hotel room for a few months he rented an apartment? What if he kicked the booze habit and bought a suit and a reasonable car? Vic was forty two years old now, but still young enough to have a family of his own someday. And for the first time in his life Vic questioned himself, uncomfortable with the realization that he had outlived his expectations. Maybe he could be normal...

But first he will have to secure his payment by presenting the evidence to his client. Vic grabbed a thick hardbound bible, a small thumb drive, and a filthy folder bursting with torn paper of varying sizes. He then headed out of the Taco Bell bathroom, past a heavyset female employee that had been waiting for him to leave. Vic figured she was the new girl since everyone that works here fears bathroom duty on Wednesdays, when he bathes. But who knows? Maybe this was the last time he will ever wash his balls in a sink. Vic felt confident, well groomed and handsome enough to get a whore on credit.

He stepped out into the familiar street and walked the few blocks to his bus bench. It felt somehow colder and less comfortable than ever, like he didn't belong anymore. After a few minutes Vic noticed a Cadillac making repeated passes, like it was looking for someone. Vic stepped out to the curb and waved the car over, leaning in to speak to the driver.

"Are you lost, stranger?" Vic asked. "I'm not sure, I was told I could find a particular detective around here, but I can't seem to find anyone matching his description..." Vic was smiling. Maybe he still cleans up well. "I'm your man. Name's Vic. I believe you will be escorting me to a meeting of sorts." The man looked surprised. "Mr. Musket, please join me. My name is Mr. Thomas. Mr. Alto is eager to speak with you." That was the first time Vic had heard his client's last name. He had apparently been using an alias in their previous conversations. That made him nervous.

After a rather uneventful drive Vic was led up a flight of stairs to a waiting elevator at a large business complex. In a few short moments he entered a beautiful executive office with a sprawling view of the city, and a solemn looking man with a huge gray mustache sitting at the desk. "Please excuse my bluntness, Mr. Musket, but I am about to pay you a great deal of money for something my security team failed to handle, and I am eager to put or business dealings behind me. Now please convince me I haven't wasted my money." Vic suddenly found himself empathizing with the Cangiani family goons he greased a while ago. This guy was an asshole. "Sure thing, Mr. Alto. Did you want to discuss how I brought you daughter's rapist to justice, or should I skip the details and go over my expenses?" Vic was playing with fire, but he knew he had this bastard by the balls.

"I can appreciate your sarcasm, Mr. Musket, but I assure you that the financial consequences of my daughter's attack were the least of my worries. I love my daughter very much, and it kills me that her innocence was stolen." Vic couldn't help but flash back to the image of his daughter savaging Benny, making him cry. Hopefully Mr. Alto was willing to pay good money to keep his pristine image of his daughter, although at this point Vic wouldn't mind crushing this asshole's world.

Vic tossed the heavy bible on the desk between them. "I believe this is what you are looking for. The proof of justice can be found in psalm 106: 3 Blessed are they who maintain justice, who constantly do what is right."

"I am impressed Mr. Musket. I did not think you to be a man of faith." Mr. Alto stated as he began to thumb through the book. "I'm not." Vic responded. "I was very 'close' with a priest at my Catholic school. Until he went to prison, anyway."

The rich man looked up momentarily, clearly disgusted. "That certainly is unfortunate, Mr. Musket. But I'm sure you can separate the evil of one man from that of the chur... JESUS FUCKING CHRIST!!!" Alto threw the bible forward, letting it tumble to the floor beside a thin strip of dried leather Vic had been using as a bookmark. An uncircumcised bookmark. "Goddamn it, Musket. I wanted proof he had been punished, but I didn't want his SEVERED COCK!"

"I wanted to make sure you were satisfied, considering you were paying me $60K for this." Vic picked up the scattered items and placed them back on the desk. "You could've warned me, I'm an old man you know! And how am I supposed to know it belongs to THE guy, huh? You could have cut that off anyone."

Vic had prepared for his client's doubts. He cut off Benny's lunch, but he let him go. He figured Benny wasn't a threat without his weapon, and he could turn the cock over for proof, but he made him sign a full confession (prior to the castration, of course). Vic pulled out the filthy portfolio and handed it over. "Here's all the evidence I have that I got your man. Now pay me."

After reviewing the documents Mr. Alto seemed both sick and satisfied. He tossed an envelope on the table, where Vic immediately snatched it up. "You've done your dirty work, Mr. Musket. Now leave my life forever. Mr. Thomas will deliver you wherever you wish to go."

"There's one final detail, Mr. Alto. I have more information, and I think it's worth double." Vic pulled a small thumb drive from his pocket and held it up between them. "You are a fool, Mr. Musket. You have shown your cards already. I want nothing else from you. Be gone, sir." The rich old man was losing his patience.

"I am not offering to show you the content of this drive. I am offering to make it disappear forever. I assure you, you don't want to see it." Vic's smile was growing. "Fuck off, you vagrant. I paid you per our arrangement. I didn't become rich by giving away my money." The old man stood up and gestured toward the door, rather rudely.

"Suit yourself. I'll just leave this here..." Vic placed the drive on Mr. Alto's desk. "Mr. Thomas, we are going shopping.". Vic new the old codger wouldn't be able to resist his curiosity for long.

Hours later Vic stood in a brand new suit, arms full of bags from the finest stores in the city. He felt transformed, lifted from his lowly street status and given another chance. He had the means to make a start. "Fuck it." Vic thought. Someone had to keep these poor whores in business. Vic tore the silk tie from around his neck and threw it into the gutter. He would never change, and he accepted it. His only regret is not being present to see the look on Mr. Alto's face when he reviewed the video on the thumb drive. He had it queued up to start with the pristine virgin daughter using a strap on to aggressively violate a sobbing Puerto Rican.