Welcome to PI Judgement, where the staff here at Popular Irony headquarters select the lesser of two phenomena. All judgements are final, and the winners must suffer the distinction of being the lamest representative of their cultural niche. Today I offer you pictographic evidence to support a final judgement as to the champion of total lameness in the battle between the two face-painting, white-trash powerhouses... Juggalos vs Kiss Army.

A close up examination of the facial characteristics and adornments reveal a few similarities between the unfortunate members of these pop music fan clubs. They both choose a black and white makeup scheme that is intended to strike fear into the hearts of the average person, but ironically inspire only laughter and ridicule. Intentional distortions of the facial muscles result in a display that can easily be mistaken for evidence of severe mental impairment, but are in fact a testament to the deliberate and shameful disregard of intellectual potential. With some documented cases of financial and even political success among the Kiss Army, their credibility in the war to appear less intelligent is suspect. Point Juggalos. 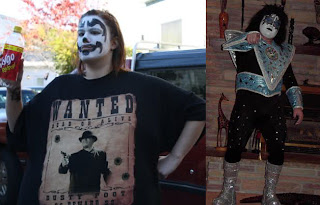 Further scrutiny of the dietary habits of either group reveal a shocking trend of poor physical health by both the Juggalos and Kiss Army. Both sides have a similar staple of fermented grain beverages and poorly prepared sausages. Combine this with apathetic laziness and seldom intercourse, and the resulting physical degradation is evidenced above. But considering a fascination for the second-rate brand of soft drinks "Faygo" gives the Juggalos the edge here.

﻿ ﻿Social impacts by either group are negligible in their current stages, with the Kiss Army having slightly higher street-level recognition. The Juggalos attempt to maintain a counter culture reputation by spreading rumors that they are involved in illegal activity, but all investigation indicates their danger footprint is close in scope to the Girl Scouts of America. The Kiss Army makes no public claim to criminal activity, but the above photo has some ominous implications. All things considered, the Juggalos take another category in the race to the bottom. 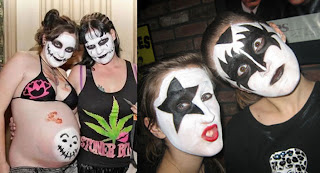 Being organized groups of pop music fans leaves another important point of contention between the Juggalos and the Kiss Army... Which has the most awful female groupies? To decide you must consider that the Juggalo groupies will most certainly be of a younger average age (by virtue of Kiss being a band associated with the '70s) and will also be far more likely to engage willingly in unprotected intercourse. And with the much larger and culturally ingrained fan base of Kiss, and the added catalyst of the "MILF" phenomenon that has emerged in recent years, the most awful female groupies are most certainly Juggalos.

Wow. I did not expect a clean sweep by the Juggalos, but the evidence speaks for itself. The final judgement here is: GUILTY! The Juggalos are the least respectable and ridiculous of these two shameful groups of misdirected people, and the most deserving of our collective contempt. If there are any Kiss Army people out there, wipe off the makeup. You look ridiculous. And if there are any Juggalos in our audience... well I hope their illiterate minds can understand my contempt based on the plentiful pictures.
Posted by Hamtackle at 10/02/2011 04:33:00 PM