Good Deed For The Day

On my way home from work today, I stopped by my local butcher.  I just started frequenting this butcher.  I had no idea how bad the chain grocery store lunch meat was until I had the butcher's delicate delicacies.

My local butcher has a very friendly, small town feel about it.  They are polite and accommodating.  At least the employees are... The customers are a bunch of hideous fucks.  Today there was a dirty, obese woman coughing constantly into her jacket... Her filthy, filthy jacket.  There was the crazy, loud, legless man, I think he just rolls in there to talk.  Then there was the mother and her brats.

Though the dirty, obese woman stank, the brats were the worst of all.  There was a young mother and her two blond terrors.  Both kids were under five and over-sugared.  The little shits were running full speed throughout the butcher shop, even venturing behind the counter several times to the employee's annoyance.  They were opening the sliding door freezers, pulling items off the shelf, opening packages, disrobing and flinging clothing everywhere, squishing the fresh baked bread, screaming and ignoring the desperate pleading of their mother.

The mother was trying but I think she really gave up months ago.  Her kids are fucking monsters.  She kept threatening the kids with "their father".  Their father this, their father that, just wait until I tell your father.  After several minutes of idle threats, I learned that "their father" was actually in the car in the parking lot the whole time.  Why did she just not leave the kids in the car with him and spare me and my fellow customers the torment of her loin beasts?  With how terrible those kids were acting, I can assume he hates them more than I do and treasures the few moments he gets to be alone.

I wanted to grab one of the kids and scream "Listen to your fucking mother!  Stop running and shut the fuck up!".  I obviously can't shake and scream at a stranger's small child.  But I could do something.  An intentional accident.

I watched the little monsters running their laps for several minutes.  I decided that the next time the loudest brat swung around the corner by me, I would casually step out in front of him.  A lesson needed to be taught and learned.  I in no way wanted to hurt the kid, at least not permanently.  I timed it perfectly, as the little shit shot around the freezer I was standing by, I stepped forward to ask the butcher a question about their delicious pastrami.  The kid slammed face first, full speed into my legs and fell down.

Much to my chagrin, the kid was not phased.  He got right back up and started running again.  But his collision with me was the last that his mother could handle.  I was delighted to see her drag her putrid progeny out to the car to sit with dad.  HA!  They did not like that and I'm sure he fucking hated it.  When I got into my car to leave, they were still screaming like tortured animals in a sedan with their very depressed looking father blankly staring forward, dead inside.

Before I left, the guy who was cutting my lunch meat glanced at the mother standing across the store and whispered to me "thanks".  You know, it feels good to do good. 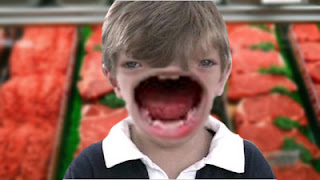