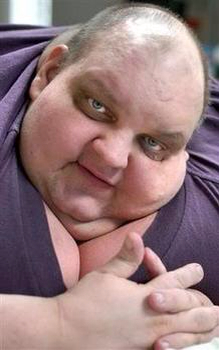 There are very few people that ever experience being on the receiving end of genuine hatred.  A small percentage of humanity becomes something so socially and personally unappealing that they are truly untouchable, and inspire nothing but disgust and contempt in their fellow man.  Albert is one of these unlucky few, a true reject in every way.

Albert was born as the product of fourth-generation inbreeding, distilling a white trash essence so pure that he never grew teeth as a child, and became a malnourished runt that was far too short for his age.  He remained with a raw, toothless hole until the day his grandfather died and he inherited his dentures when he was twelve years old.  Now able to eat solid foods, Albert's weight skyrocketed to over four hundred pounds, leaving him in the awkward position of having a waistline longer than he was tall.

And when he spoke the noise came out like a phlegmy cough, complete with a foul mist of saliva that would leave anyone within earshot with a sticky coating that smelled like the inside of a prosthetic leg.  No one was ever able to tolerate him long enough to allow for proper speech development.  He would sweat brown fluid so profusely that it was visibly oozing from his skin, like a slowly squeezed kitchen sponge.

Albert was profoundly stupid and attended "special needs" schooling, but was never accepted among the retarded community.  He was the butt of their cruel taunts, and looked down upon as something not only abnormal, but nearly inhuman.  Tales of his worthlessness spread beyond his hometown, and soon his home was blacklisted by Jehovah's witnesses and sales people began to ignore his "solicitation welcome!" sign.

In his twenties Albert began to feel very much alone and depressed.  The suicide prevention hotline blocked his phone number after repeated calls.  He tried to hang himself several times, but was so poor at tying knots that he always ended up crashing to the ground.  He was a very sorry bastard indeed.

Unable to work, he was supported mostly by disability from the government.  He was assigned a very nice social worker woman to meet with him monthly and monitor his progress.  The nice lady found him so disagreeable that she eventually tried to kill him with her shoe, but was acquitted without prejudice when her defense attorney called Albert as a witness.  He was able to win a civil suit, however, and survives happily on the large government settlement.  And now he lives the American dream, fat on the teat milk of the society that despises him.