World overpopulation and advances in modern medicine have created a perfect storm of human diversity. And as a big game hunter it quickly becomes clear that the most dangerous animal in the world is also the most satisfying to hunt. So with the spirit of a collector and the personality flaw of a borderline obsessive-compulsive teenager with a pokemon addiction, I bring you a wish list of trophy kills. Anyone could bag more common fare, like non-english speaking teenage American resident with more children than completed years of public education, or an obese ICP "juggalo" with at least one meth head parent. But the true hunter will have to leave his local community in pursuit of more exotic game. 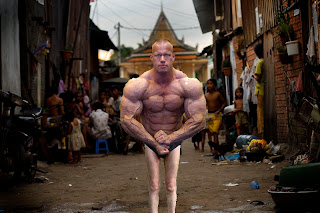 The Lopsided Bodybuilder: This rare specimen defies the traditional perfectionist mentality of the bodybuilder. The name of the game is symmetry for competitive bodybuilding, and focusing too much on individual muscle groups throws the entire equation off balance. Traditionally sporting exceptional upper body development with the spindly legs of a lifelong paraplegic, this game is most commonly found seated at tables, where it's trademark legs can best go unnoticed. When startled the lopsided bodybuilder stands it's ground, having accepted immobility as part of it's very being. Beware that a downed beast can be very dangerous should your lower limbs be unprotected. Treat these creatures with respect. 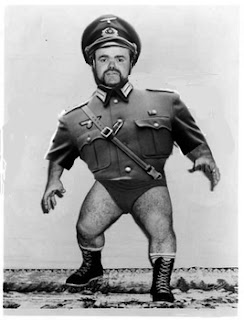 The Racist Dwarf: As uncommon as they are diminutive, the racist dwarf has lashed out against any and all minorities as a response to their own genetic misfortune. Finding a specimen that is displaying it's full Nazi uniform "plumage" is a once in a lifetime opportunity, as such a display is most often perceived by the public as adorable rather than threatening. The same qualities that make them adorable make them excellent at hiding: their size. Considering this disadvantage a prepared hunter will consider baiting or trapping this game.

The Hermaphrodite Nun: This is the true "holy grail" of the dedicated oddity hunter's wish list. It's incredible scarcity is inherent in it's chosen profession, as the Catholic church has a long history of condemning any hermaphrodite birth. This is best evidenced by the recent change in Catholic policy regarding abortion, where restrictions have been lifted against the practice in cases where ultrasound images support a hermaphroditic diagnosis. The few documented cases of "hermie" nuns were all the result of gradual acceptance of the nun after abrupt discovery of their condition following decades of dedicated nunning. Prevalence of these creatures is declining after changes in nun enrollment policies introduced a physical examination to prevent further hermaphrodite enrollment. Since certainty in identifying this game requires intimate contact, serious hunters must consider close quarter hunting methods, such as knife or choking techniques.

I hope this guide helped make your next hunt a safer and more rewarding experience. Remember to send us your best hunting stories/pictures to PopularIrony@gmail.com and we will make sure to share them with our dedicated viewing audience. Until next time, happy hunting!
Posted by Hamtackle at 9/04/2011 07:07:00 PM