The World Series Of Political Poker 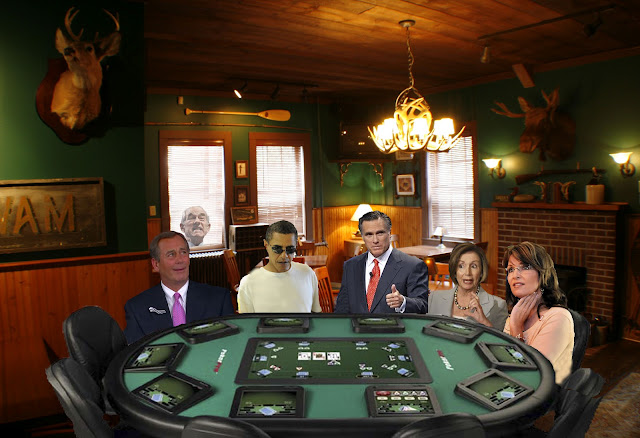 
Incredible poker face, keeps cool in the most heated battles. Seems to play the game as if he doesn't want to win, or rather, doesn't want anyone to lose. Believes all players should volunteer to pay a higher ante for each game, and if any one player falls behind he should be considered for a communal "buy in" at a higher interest rate, just to keep things fair and interesting. Although he is very personable and pleasant, all other players hate him.

Is in favor of eliminating the ante, and indeed would rather forego the entire game if all players agree to preemptively pass along their winnings to him, as he believes he will make the wisest choices when spending the money and in the end it will be better for everyone anyway. Promises that if he is allowed to win he will pick up the bill at the end of the night, except for the beer because he didn't have any. He is generally disliked due to his habit of playing cards while wearing a $10,000 suit, and over-using the word "fortuitous".

The most unpredictable player, she has a habit of going "all in" regardless of the hand dealt to her. Talks too loudly and generally annoys all other players, but is tolerated because she frequently loses and a few players think she might show her tits some time. She remains flattered by her given nickname "The Anchor", but doesn't understand it is a reference to her ability to sink a campaign in record time. But she keeps the mood light by spitting in Barack's drink whenever he goes to the bathroom.

So named for the irregular color of his skin, Boehner insists on his invitation to poker night every time despite hating the game in general. He initiates discussions on tactics and is always the first to volunteer to deal the cards, but stalls the game and frequently declares that everyone is cheating. It is very difficult to complete a game when he is playing, earning constant claims of "obstructionist gambling" by Barack.

Takes a seat at the table, but never plays. She prefers to watch the game progress from the outside and then criticize the winners. Shamelessly roots for Barack much to his embarrassment, and is always on hand with a handkerchief to blot the tears of Boehner when he breaks down, which happens frequently. She is tolerated because she is a cheap date, drinking only water and eating only bird seed.

Not allowed to play, Paul is present at every game venue pounding on the door and shouting. All poker players have a silent agreement that he is dangerous to the game, and fear that it would quickly degenerate into a fistfight if he was allowed in. "Mittens" Romney always calls the local nursing home to have him picked up outside, a joke that got a laugh one time so he repeats it ad nauseum.