There have been many mistakes made by man since we first branched off the evolutionary tree, but few have been as costly as the invention of religion. People have always done insane and dangerous things, but religion validated these practices and gave the insanity legs to run wild with. So tonight I present you all with the evidence of how ridiculous faith appears to the modern sceptic, and expose some of the strange rituals that are still performed today. And please remember that here at Popular Irony we never discriminate. Whether Christian, Buddhist, Jewish, or even Mormon, we treat them all as dangerously gullible sheep. Just like their religious leaders do.


﻿﻿For my first submission I bring you Kaparot, the Jewish ritual of sin absolution. Basically you bow down while a man waves a live chicken around your head, supposedly imparting the animal with your sins, then killing the bird and eating it later that night. My first concern here is for the chicken. This seems like a shitty deal on his end, no matter how spectacular the sin was. The Christians had Jesus to die for their sins, and the Jews have poultry for the same purpose. But only one Jesus had to die for all humanity, while the chicken is only good for one man's annual sin accumulation. It seems to me that if you don't want Jesus/Chicken to have died in vain you should put more effort into committing sacrifice-worthy sins. Best homework assignment ever! 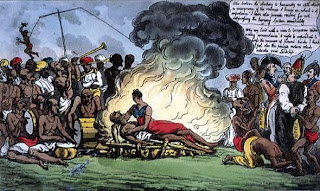 Now take a moment to consider the Hindu practice of Sati, which still occurs in rural parts of India today. Normally, when a married man dies he leaves his wife to carry on alone, until she croaks and they both get to live together in an imaginary playground for eternity. Sati relieves the wife of the terrible burden of living without her strict, often unwanted husband to a ripe age by dictating that when her husband is burned to ashes (as is customary in Hindu funerals) she throws herself on the blaze. And before you get all emotional about her sacrifice in the name of love, there is much documentation indicating that the women were often forced onto the fire by the other attendees. And it probably surprises no one that there is no equivalent ritual for when the wife dies before the husband. Considering the universal mistreatment of women in religion I can only conclude that God hates vaginas. I am not sure why, since I consider them to be absolutely fantastic. 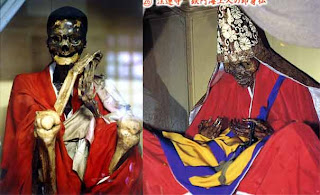 Japan has a well-earned reputation for being incredibly weird, from having vending machines that dispense dirty underwear, to the popularity of tentacle porn, but their religion often gets a pass concerning cultural criticism. It might be because of the emphasis on peace and happiness in the Buddhism, or it's refreshing lack of aggressive recruiting practices (we're talking about YOU, Jehovah's Witnesses). But give credit where credit is due... the Buddhists have their own fucked up practices. Sokushinbutsu is described as "ritualistic self-mummification". Chew on that for a minute to properly grasp the horror. Monks that wanted to make the ultimate sacrifice would spend 1,000 days eating nothing but a minimal diet of nuts and berries, eliminating all body fat and giving that holocaust chic look. Their diet would then switch to bark and roots, including a tea made from the poisonous Urushi tree for the next 1,000 days. This would cause violent diarrhea, and making their flesh distasteful to maggots and other insects. They would then be locked in a room where they would sit in the lotus position, ringing a bell each day to confirm to everyone outside that he was still alive, until he starved to death. Naturally they would then be placed in a prominent area for everyone to see. Oh yeah, this process also imparted the corpse with magical powers. Sounds like a solid tradeoff.

It is worth pointing out that these rituals are only examples of how the faithful treat each other, not outsiders. They save far more horrifying practices for us non-believing heathens and infidels. But that is a post for another day.
Posted by Hamtackle at 11/19/2011 10:42:00 PM