Last night, I had a few friends over to watch men pummel other men in tights and/or bicycle shorts.  Hamtackle and Sir Chapsworth can't get enough of the mixed martial arts, homo-erotic extravaganza that is UFC.  Personally, I am not entirely interested in UFC but I still agreed to host the shindig.  Vicon showed up with a stack of Little Caesar's, so it was shaping up to be a wonderfully drunken evening.

It was raining pretty hard while we were watching the Tickle-fist competition, so we stepped outside to watch the storm.  I live in an area that does not get too much rain, not to mention torrential downpours.  So It was pretty incredible to see the streets swelling with water.

Suddenly, I saw a large toad hop in my front yard.  I see toads all the time but I still like to look at them.  The rain let up for a moment so I approached the amphibic beast.  Much to my surprise it was not the common toad but an American Bullfrog.  "What the fuck?"  I thought.  I don't live very close to any ponds or streams.  Where did this little fucker come from? 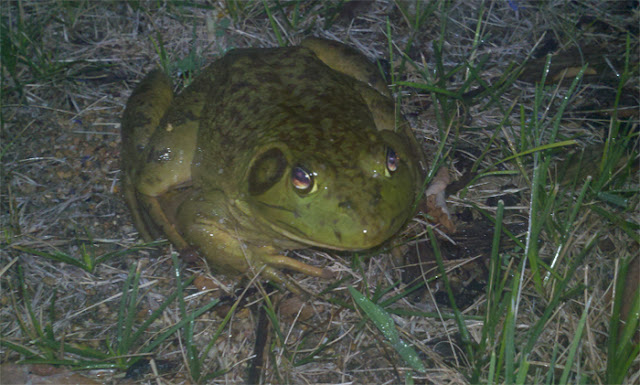 Did you ever see that video of the chimp using the frog as a Fleshlight?  Fucking hilarious.


My answer on how this unexpected guest arrived at my house was easy to discover.  Just a search for American Bullfrog on Wikipedia produced the following info.  "On rainy nights, bullfrogs, along with many other amphibians, travel overland, and may be seen in numbers on country roads."

I was about to release my moist new friend when he was snatched away by Sir Chapsworth and Hamtackle.  They spent the next few hours watching UFC and sharing their new Fuck Frog.  The frog lived through the night but I don't think he'll ever fully recover.