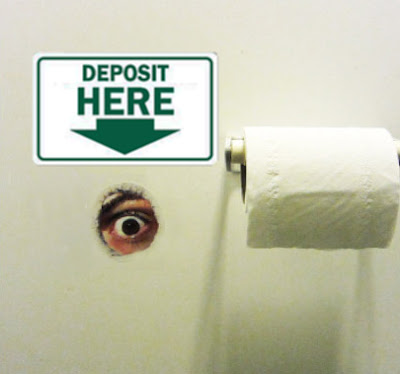 The sperm bank is a place that pairs up poor but genetically desirable masturbators with sexually barren relationships such as infertile male partners or lesbians. It serves a needy population that is either unsatisfied with the quality of available children within the adoption pool, or women that feel a burning need to sacrifice their womb to the demands of their insistent biological clock. In my humble opinion, anyone that feels the need to procreate should be talked out of it or settle for an already-living baby that was the product of another couple's hasty mistake, particularly in the case of infertility. We have enough people on this earth and children get on my nerves. So how can one sabotage this useless industry and strike a blow for negative population growth? Well I have a few simple ideas.

Now there are many methods one could employ to damage the reputation of these baby factories, such as disseminating misinformation to the media and internet forums. Call the media anonymously and claim that you are HIV positive and have been successfully donating to various sperm banks for years, and the failure of the banks to detect your illness has recently led to personal guilt that led you to speak up. Or maybe you could claim that you were a long time employee that has been switching samples with your own, and have probably fathered thousands of children. Either way you should see a dramatic decrease in business.

But the best methods of trolling sperm banks is accomplished from within. Firstly, you will need to gain access to the sperm bank reserves, which can be quite difficult unless employed by the bank. So either make a career change or take a rather serious risk by pretending to be an employee. From there you have two excellent options to sabotage some unsuspecting couple's genetic future. The less cruel of the two options involves messing with the expected outcome by switching the samples around. My best suggestion is that you switch all the blond haired, blue eyed donors with african-american ones. Not only will you potentially destroy the relationship by adding a suspicion of cheating in the couple, but you could possibly get lucky and crush the dreams of a few unsuspecting racists! Two birds with one stone, baby! Imagine the disappointment of a white supremacist in the delivery room when the kid is born... priceless.

The second option is more hardcore, but will go a longer way toward discrediting sperm banks as a whole. You will need to get a hold of a non-toxic chemical that can taint the sperm without killing it outright, and while there are many you could choose from, some are difficult to obtain. But if you are proficient in chemistry, you can download a simple pdf with instructions on how to synthesize acrylamide, which is present in tobacco smoke and can cause a whole host of birth defects of varying severity, all the way up to cancer! If you don't have the necessary skills you could always employ a chemistry student from your local university and they shouldn't have much difficulty performing this step for you, provided they are not incompetent. To avoid suspicion just explain that you are an inventor working on your own formula of industrial grouts and cements. Then just spike the samples (a little will go a long way) and your job is done. Cue the three-headed baby!

So the next time you walk through a department store and wish you had a shotgun to deal with the rampant plague of self obsessed kids remember these suggestions. After all, we all have to share this world we live in and we should have a say in just how fucking crowded it gets.