Films For Fiends- Schramm: Into The Mind Of A Serial killer 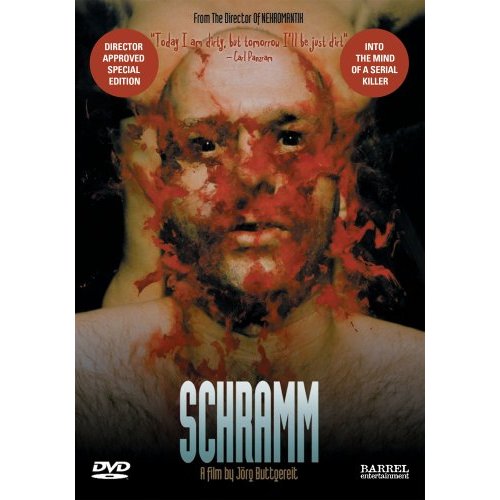 Greetings, readers.  Tonight I present you with another installment of my demented film reviews with a critique of Schramm: Into the mind of a serial killer.  This is yet another german horror flick to make the list, and shares much in common with Nekromantik, including the director, while maintaining a contrast worth mentioning.  It was directed by Jorg Buttgereit back in 1994 and follows the demise of Lothar Schramm, known as “the lipstick killer”.  Instead of focusing on the more gruesome elements of shock cinema this film instead gives attention to the mindset of the killer and his insanity.

The film begins with Lothar, unconscious on the floor of his apartment.  Then we see that he has fallen from a ladder while painting his walls, which are covered in blood from a recent murder.  He answered his door to see a pair of Christian missionaries, who he lets into his home to discuss his salvation.  When he leaves the room to fetch refreshments he returns with a knife, cutting the throat of the man then changing to a hammer to dispatch the screaming woman.  It was while cleaning up after this crime that he lost balance on the ladder due to a prosthetic leg, and fell to his death.

The film then covers the last few weeks of Lothar’s life, including his relationship with a female neighbor that happens to be a prostitute.  He clearly yearns to be with her, masturbating with an inflatable vagina while hearing her servicing a client through the wall.  We learn that Lothar is a taxi driver, and frequently escorts his whore neighbor to some of her “house calls”, where he has insane and detached daydreams waiting for her.  The line between reality and insanity is difficult to define, and we are treated to scenes of Lothar waking up to find his legs freshly severed, and finding a quivering, oozing vagina with teeth in his bed.  His mental state deteriorates even further until we are treated to a scene where he drives several nails through his uncircumcised penis.

And although he kills strangers without batting an eye he is unable or unwilling to kill his prostitute neighbor, even after drugging her in his apartment.  He simply strips her nude and takes pictures before dressing her and tucking her in for the night.  It is shortly after that he takes his fall and bleeds out on the floor, dreaming of a dark figure striking him down in a foggy abyss.  The film ends with a glimpse of his neighbor tied up in a stranger’s home, in dire trouble after Lothar fails to escort her on her last date following his death.

This film is more interesting than many of the shock horror films I have reviewed in this series.  I appreciate that the director elicits sympathy for the killer without giving him any obvious human virtues, but rather by showing the chaos that goes through his mind all day.  Lothar does not seem like a mindless killer, and appears to be almost harmless when he is not furiously battering and stabbing his victims.  The scenes that stick in the viewer’s mind are not images of bloody murder or dismemberment, but of dark and demented fantasies within the killer’s mind.  And while it is short at just over one hour long, it achieves its objective by keeping the viewer from trying to analyze the killer and just observing his madness and personal tragedy.  This one is worth a watch to anyone more interested in the mindset of killers rather than their specific crimes.