As you may already suspect, Terlet is a kind-hearted, gentle and polite person with a humor that ranges from silly irreverence to downright filthy. Hamtackle (myself) share in his uncommon taste in funny, but I also am fueled by a sincere curiosity about all things horrible and taboo. My pursuits have led me to witness countless videos of atrocities, torture, mutilation and death, but only in the name of a good time. So I thought that I might perform a service to those like Terlet that have no stomach for the violent filth I have come to love, and begin a segment of film reviews for the rare cinematic gems that truly shed light on the darkest side of the human condition. In short, I watch them so you don't have to. 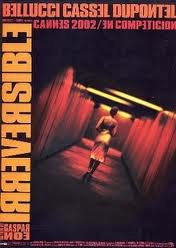 For my first review I have chosen the infamous 2002 Gaspar Noé film Irreversible, starring Monica Bellucci. I believe it is still available on Netflix, but you may want to check out the review before viewing as it has two scenes that rank among the most disturbing in modern cinema, leading Roger Ebert to call it "so violent and cruel that most people will find it unwatchable"

The film is shot out of sequence (think "Memento") helping build a sense of disorientation and suspense, and begins with a chaotic sequence of scenes that shows a violent confrontation in a gay sex club where a man is beaten to death with a fire extinguisher. The event is displayed in a very graphic style, pulling no punches as the victim's head is literally crushed to oblivion. We are then introduced to the three main protagonists, Alex (Bellucci), her boyfriend Marcus, and her ex, Pierre. The trio experience the most nightmarish evening imaginable when they attend a party together, and Alex becomes upset with her boyfriend when he gets drunk, and leaves the party abruptly. While walking home through an underground tunnel she is attacked and savagely beaten and raped by a cruel pimp.

Once again the viewer is spared no gory detail, with an unbroken shot of the act for what seemed like ten minutes. He overpowers her and delivers such a brutal beating that it is hard to tell if she will survive, and the scene is perfectly cringe-worthy. I can only imagine the shock and disappointment of some poor lonely soul that searches for Monica Bellucci nudie scenes online and stumbles upon this mess, because it is a surefire limpness-inducer unless you are a truly depraved sort (I plead the fifth regarding my feelings on this). The rape is detailed in an unnecessarily long unbroken shot, but grants this film a solid showing in any serial killer's personal collection.

From there the two men who love her go on a mission of vengeance, employing shady criminals to track down their target in the aforementioned gay sex club, where a frantic Marcus attacks the pimp with reckless abandon only to be overpowered, but later saved by Pierre, who ends up delivering the killing blow. His aggression is so unrestrained that we are left with the impression that he is still very much in love with Alex.

If there can be any criticism of the format it is that the climax is delivered like a gut punch right away, and we work backwards to find out exactly why the headless gentleman was treated with such disregard, which leaves us with a somewhat slow progression to the ending which allows the trio of main characters to fade into a simpler and more innocent time before the horror. And some may take exception to the shaky and disorienting camerawork, which overdoes the jittering wobble particularly early on, but is clearly an artistic choice by the director. Oh yes, and if you are a fucking moron that can't watch movies with subtitles, it is worth noting that this is a foreign film.

Overall I would say this flick does well with the two most infamous scenes, and I respect the director's decision to include a level of detail that makes it inaccessible to any but the most hardened viewers, but it feels a little lopsided since the vast majority of the plotline is filled with much less violent, non-rapey sort of fare. The message of Irreversible to the viewer is one of the fragility of our pleasant lives, and how quickly they can intersect with the ever-present dregs of humanity, and how so often we let them drag us into the depths with them.

I already have a doozy of a film lined up for my next review, but you are going to have to wait until next week. Until then... happy viewing, degenerates!