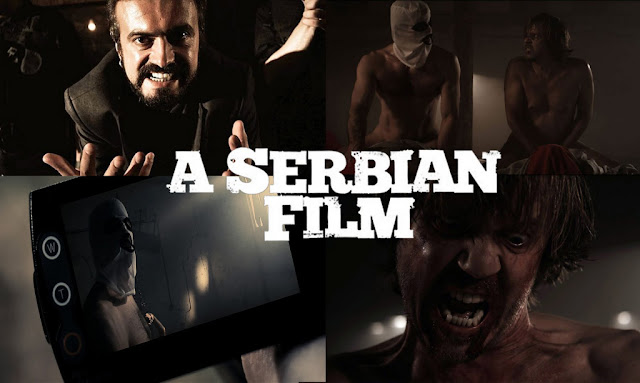 Good evening, fellow fiends. I have viewed another completely filthy and disturbing film for your reading pleasure, and this one is quite foul indeed. I watched A Serbian Film, the notorious and controversial 2010 flick by first time director Srdan Spasojevic, and it did not disappoint. Do not seek this one out unless you are prepared for sexual torture, rape, pedophilia, necrophilia and murder, because the over the top ending has them in spades.

I was well aware of all the hype surrounding this movie, but I must say that it went farther than even I anticipated. It is best described as being like the Eli Roth Hostel series if it were written and directed by The Marquis De Sade, and has been banned in several countries for tow scenes in particular that depict truly disturbing acts. And if you still intend to pursue this film then it is worth mentioning that I will be including spoilers in this review.

Milos decides to quit, but when he tells the director he is shown a video of an act so horrible that I am not comfortable writing about on this blog. Seriously. It is that fucking bad. If you want to see it go ahead, but you have been warned. At any rate, Milos flees from the director's home but awakens abruptly soon after, and we see he has lost several days of his memory, and is covered in blood.

Milos does some investigation and finds a video record of what has happened to him, where he finds he was unknowingly drugged with a cocktail of substances such as speed, viagra and a strange agricultural-grade aphrodisiac to make him a mindless fucking machine, and he watches himself being unleashed on a woman that is chained to a bed, beating her savagely until his captors hand him a machete, and he proceeds to behead her and frantically fuck her corpse. And if you consider that I am detailing this scene, just imagine how horrible the earlier one is.

Milos also sees that he was raped himself on camera while unconscious, and begins to piece together his memory of what happened over the last few days. He was pressured to have sex with the underage girl from the earlier scenes, but to his credit he held his penis hostage with a filet knife, knowing the director would never want to lose his penis which is the star of the show. After escaping, and still very much affected by the drugs he has been given, he ends up being attacked by a few men on the street when they find him masturbating uncontrollably in an alleyway, but is saved by the director's goons and recaptured.

He is then given further doses of the drugs and let loose on two anonymous bodies, anally raping them like an animal, but when another man joins in the raping he notices that it is his own brother (who has been secretly lusting for Milos' wife), and the two bodies they are raping are his wife and young son, who have both been similarly drugged. Milos and his wife both snap out of their stupor due to the gravity of the situation, and they brutally kill everyone in the room, with Milos literally skull-fucking the lead goon in the eye, killing him.

Once away from the scene Milos, his wife and his child are all so badly scarred by the incident that they have a group hug and accept a fatal suicide gunshot that kills all three. Then the camera pans back and we see that a new director has been recording their deaths, and commands a nearby goon to rape their corpses, starting with "the little one".

So there you have it, folks. A movie that no one will ever see unless they specifically look for it, like I have. I am amazed that anyone was convinced to bankroll the production on this flick, let alone willingly acted in it. This is definitely the most disturbing fictional film I have ever seen, and is a strong favorite for most distasteful film of all time. I fully expect this director to take on the theatrical release of "Three Guys One Hammer" or "The BME Pain Olympics" next time around. I know he would do it justice.

All things considered, this film is well-shot and well-acted, and seems like it enjoyed a healthy budget which is uncharacteristic of foreign shock cinema. I would fully suggest it to any viewer that enjoys having their boundaries tested, and is unwilling to heed my earlier warnings. Enjoy!