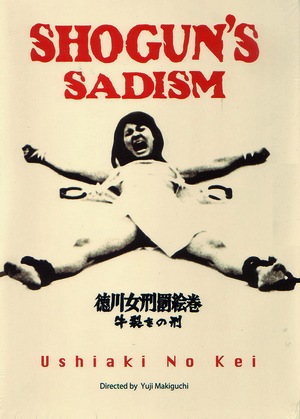 Recently I have been having a difficult time finding suitably cruel and horrific films to review for this series, but I am delighted that at least I can always count on the japanese to come through. Tonight I watched Shogun's Sadism, also known as The Joy of Torture 2: Oxen-Split Torturing. No matter the title, the cinematic intent is pretty clear. This movie consists of two short stories, the first of which I will discuss here. My hopes are high for a romp through the high grass of offensive asian shock cinema.

The setting is Edo in the Shogun era, when christians were being persecuted and killed in a variety of inventive ways. The film opens with a woman being boiled alive, then another hanged before being sliced in two at the waist by a katana. The plot is almost nonexistent, with a thin storyline involving a forbidden love between a traditional young man named Lori and a christian woman after their chance meeting at a riverside snake bite incident. Then the persecution of the christians is detailed in a few scenes of rape, men being burned inside a cauldron, and a man's foot being battered into pulp by a giant hammer to the point that his bones are neatly pulled from a mass of torn flesh. Classy stuff.


Predictably, the lovestruck boy is torn by his feelings for the young girl after she is discovered and subjected to awful sexual abuse, eventually made into the shogun's personal concubine after a rather crude test of her virginity. First impressions are: There is a disturbing amount of rape in this movie, and in true japanese fashion, the penetration is blurred to prevent any, you know... obscenity from tainting the frequent depictions of forcible sexual violation amid a chorus of female screams. It also seems ambiguous whether the intent of the film is to depict a shameful period of cruelty in japanese history, or just to make a lighthearted casual flick about the "good old days". You can never be sure with japanese cinema.


The troubled young concubine is ultimately made to betray the identities of her fellow christians in a desperate move to stop the torture of her younger sister, whose eyes are burned out with a red hot poker, and she is made to watch them all face the fitting end of being crucified and pierced with a long spear. Then more torture and rape. lather, rinse, repeat.


Eventually Lori becomes disillusioned with his master's horrible ways and is banished after suffering humiliation in the form of having his hair sliced off (shocking, I know), and vows to rescue his love to prevent any further abuse. He is able to intercept her from her captors during transport, granting him a night alone with her. Unfortunately they are discovered in the morning and Lori is unceremoniously cut down in a brief sword fight. But once again we see that men had it much easier than women in those times, as the christian girl is sentenced to die by having her legs torn in opposite directions by an elaborate system of pulleys and oxen. And credits roll on the first short story as we are informed that the shogun is later promoted to minister of religion. How fitting.


My final conclusions are lukewarm here, as I was turned off by the misogynistic imagery and frequent rape scenes. I counted about nine acts of rape and sexual abuse in around 40 minutes, putting it far in the running for most tasteless film yet. The special effects are decent, save the cut aways that spare the viewer from seeing the awkward transition from unmarred human flesh to tattered raw pork shots, but the real disappointment is in the final ox splitting scene. The young girl's lower torso is clearly hidden through a hole in the platform, sloppily masked by white rags as her legs are torn asunder. Not that I was hoping for any real depiction of violence. I mean, only a real sicko would seek THAT stuff out.