Back in college, I was in desperate need of money.  To relieve my financial burden, I volunteered for a medical study.  It was a study in pheromones and how they affect the human brain.  I didn't care much about the experiments and I willfully participated in dozens of different tests.

That's where everything changed.  One day they had me take some pills.  They said they re-sequenced something in my DNA.  I was a bit concerned, but they offered me double pay and I accepted.  I felt totally fine, but a few hours later, strange things started to happen.

One of the research scientists started to get very flush in the face and began making "bedroom eyes" at me.  It was very out of character of him.  He was usually a very restrained and extremely smart guy.  Suddenly, he leaped from his chair and started groping and kissing me all over.  It took several minutes for the other scientists to pry him off of me.  It was ..... awkward.

He was completely irrational and had a raging erection.  The other scientists dragged him from the room and as quickly as it started it stopped.  Once he was a couple of rooms away from me and regained his sanity.  He was very confused and extremely embarrassed.  He says it was like he completely blacked out.  He retained no memory of his attack.

The four other scientists working on the project were at a complete loss.  What had triggered the strange behavior in their coworker.  They knew that they had scrambled my DNA and made my pheromones all funky, but they could not determine why it only affected that one guy.

When I was walking home from the lab that night, I passed a frat party.  There were a good dozen of the bros on the front porch drinking beer.  I know a few of them, they are cool guys.  They offered me a beer and when I approached to take one, two heads jerked up, eyes fixed on my face.  The two guys bolted from their seats, dropping their beers.  They then proceeded to tackle and passionately dry hump me on the front lawn.  The bros, thinking it was a joke, started laughing.  The laughter slowly died down when they realized that their friends weren't kidding and weren't stopping.

They pulled the guys off of me and I started to sprint back to the lab.  Running hurt because my legs and butt were covered in dick bruises.  I made the mistake of taking a short cut through the musical theater department.

Suddenly, I had a baker's dozen of thin, scarf wearing men sprinting after me, boners exposed.  I made it to the lab and slammed the large glass doors.  I grabbed a chair and rammed it against the doors.  The men started to pound on the glass, but with me no longer sharing their air, there lustful looks faded and looks of confusion took over.

The scientists have not yet been able to find a way to fix me.  To prevent my future unintentional rape, I have to wear a pressure suit whenever I leave the house.  Hmmmmmm...  It's the fault of science that all gay men need to fuck me. 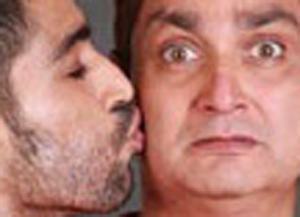