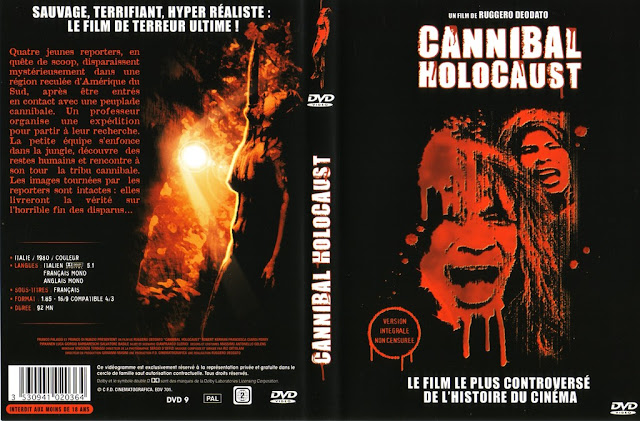 Cannibal Holocaust is an italian horror film directed by Ruggero Deodato that was the center of much controversy when it was released in 1980 due to it's horrifically graphic portrayal of tribal violence and sexual torture. This is one of the first films to use the "found footage" concept to add realism, and is clearly had influence on later work like The Blair Witch Project. Apparently many thought the effects to be so realistic that they believed the film to be an actual documentary, which makes no sense as it is full of shitty acting and is clearly fictional. But this did not quell the controversy, and the film was widely banned amidst rumors that some of the actors were actually murdered on film to add to it's authenticity, and the film's producer was arrested on obscenity charges.

The plot centers around a group of American filmmakers that descend into the jungles of the amazon in search of indigenous tribal people that have been segregated from modern society. They predictably don't return, and an adventurous anthropologist takes up the task of hunting them down to determine their fate. Aided by a group of paramilitary guerrillas, the doctor is led into the heart of the jungle where he witnesses savage acts being performed by the cannibals.

As the group encounters the tribal population they dazzle them with such modern technology as switchblade knives, guns, and music from a cassette player, and are pressured to join them in feasting on the liver of a long decomposed human corpse. They are able to get in the good graces of the natives and manage to recover the film record of the lost documentarians and return to modern society where they review the footage.

The lost footage shows routine horseplay as well as a gruesome scene of the group dismembering and eating a giant live turtle. As with all of these shock horror movies from the '70s and '80s the killing of live animals (including a later scene of a monkey being decapitated) is always the most disturbing aspect of the gore, and could never be done today without widespread outrage.

Things turn south for the group after their guide is bitten by a poisonous snake, prompting the group to hastily amputate his leg, killing him. When the group first encounters the tribal people, they shoot one of them in an attempt to slow him down and follow him to the larger population, setting off a chain of events that seals their fates. The dark side of the documentarians is revealed, and they strangely decide to kill as many of the natives as possible by lighting their huts on fire. Why they do this is never quite explained, and makes no sense since they continue filming it and apparently still plan on releasing this film on their return.

The doctor that retrieved the film becomes distraught when watching it, and becomes reluctant to release the footage publicly due to the atrocities being committed, and worries that the natives will be judged harshly for their cannibalism despite being provoked to violence by the ignorant outsiders. In an effort to convince his employers to never release the film, he shows them the worst footage in which the group captures and takes turn raping a young tribal girl, then impaling her on a huge wooden pole. In another ridiculous moment, the group pretends the woman was killed by her fellow tribespeople despite having just filmed themselves raping her.

At this time the tribe descends on them, killing their cameraman with a spear and cutting off his genitals. For some inexplicable reason the survivors decide to stick around and film as he is dismembered and eaten, and somehow are not discovered just feet away in the bushes. When they try to flee the female is captured and raped (of course the cameraman again decides to remain behind to film it), and they are all beaten to death and eaten. The doctor is successful in convincing his employers to never release the footage, and the film ends with him lamenting "I wonder who the REAL cannibals are..." How poetic.

I must say that this film was comically bad. The producers ignore countless continuity errors, the acting is some of the worst I have ever seen (especially the female documentarian, who seems incapable of delivering her lines without retarded facial contortions), and they try to deny their own blatant racism in the depiction of the natives by revealing at the end that they were provoked to violence by the inhumanity of the western invaders. The real inhumanity displayed here is by the producers themselves, as they kill about a half dozen live animals (a small rodent, a pig, snake, turtle and a monkey) simply for shock value. At least most of the other films I have reviewed were good for a laugh, I spent most of the time while viewing Cannibal Holocaust just waiting for it to be over. It seems like the whole thing was just an excuse to show simulated rape. If that kind of thing is your bag, then go for it. Personally, I deleted this from my hard drive immediately after watching it, not out of shock, but out of disinterest.