The 2012 Popular Irony Celebrity Death Poll has claimed another victim.  A legendary author who received only 1 vote on the Death Poll despite his advanced age. 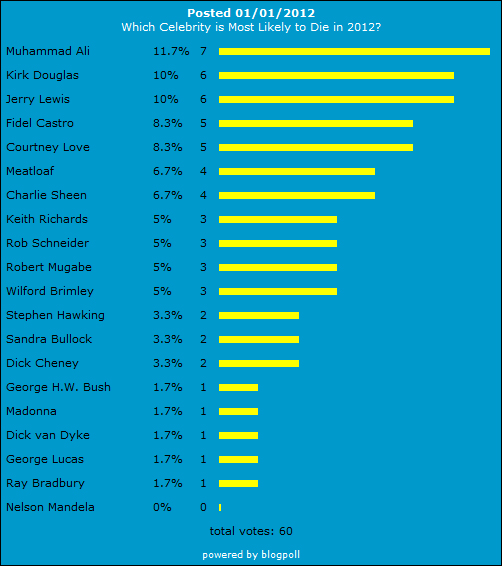 It is sad but true folks.  Ray Bradbury died today at the age of 91.  I am pretty sure that I cast the one vote he received.  I am a fan of Bradbury's work and have worried about him getting old and dying for many years.  I remember reading Dandelion Wine in high school and remarking at how Bradbury was still alive.  He lasted another 15 years after that and kept his wits the whole time.  Bad-ass.

Who's next!?  Go ahead and Vote now on this extremely limited poll, there are links below.  If you have your own celebrity death guess, go ahead and leave a comment below.

Which Celebrity is Most Likely to Die in 2012? (BLOG POST)