I Think My Cat Is A Whore 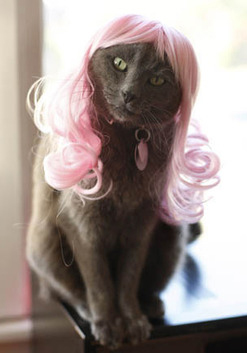 She was constantly begging to go outside, and disappeared for hours. Upon her return her fur is disheveled, she walks funny, and I hear the not-so-distant wails of unfulfilled strays calling for her. I think my cat is a whore.

So I stopped letting her go out and started shooing away the strays that assemble outside my back door, but her personality changed overnight. She was getting rather aggressive with me, and I could tell she wasn't very happy with her enforced imprisonment in the house. Her behavior worsened until I made a disturbing discovery that shed some light on the situation. I found four empty bags of catnip tucked under her kitty bed.

I was unsure how to handle this problem without provoking her, and her emotional state was becoming unpredictable to put it mildly. When I returned home from work one night I found a fresh shit on the center of my bed and a decapitated mouse in the bathroom. I can only assume it was a warning. So I let her outside.

She was gone for two straight days and I was certain I had lost her. But late one night I heard some moaning out of the bedroom window. She had returned, but was desperately hungry and downright filthy. Her fur was now matted in what I imagine was the dried semen of dozens of tomcats, and she appeared to have some sort of eye infection. Thank goodness I had her fixed years ago. I don't think our relationship could have survived if she brought a litter of nip-babies into this world. It was then that I decided to get control of the situation in anyway possible.

I have reinstated the harsh imprisonment terms, at least until I can trust her again. And in a last ditch effort to keep her demeanor manageable and prevent frequent escape attempts, I caved in and decided to feed her addiction. I currently give her servings of catnip twice per day, but with a slightly reduced quantity each week. By my calculations I will have weaned her off the nip within two months. It terrifies me to think how long she has been on this shit, and I feel guilty that I was so blind. I could have saved her so many hasty back-alley penetrations if only I had known sooner...