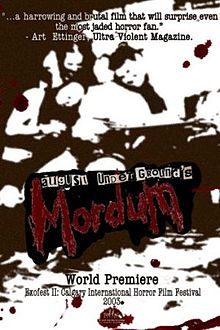 Hello again, filth hounds! Welcome to another installment of Films For Fiends with your dear Hamtackle, where I watch the most offensive and vile movies available, ruin the plotlines, then give a brief review. Today I bring you August Underground's Mordum. It strikes me as an incredibly cheaply made indie goth shock film, but let's not judge a book by it's cover.

The film is entirely shot with what looks like a handheld VHS camcorder, and begins with a man catching his girlfriend fucking another man, who we later find out is her brother. When confronted the woman uses a transparently fake special effect to "cut" herself, and her boyfriend tries to let off steam by tracking down a random man and attacking him with a hammer. Afterwards the couple searches the man's house to find disturbing evidence of a household of junkies, complete with maggot-ridden food and overdose victims, before settling in to cut apart the body of the hammer victim.

Then cut to another home, where our duo inexplicably have a pair of people tied up and locked in wooden chests. They pull one woman out and rape/sexually assault her, and torment a man with a knife and scissors, forcing him to castrate himself. This leads to further sexual torment for the female prisoner as the pair shove the severed cock into her vagina. Classy, I know.

The next ten minutes or so consists of throwaway footage of the couple aggravating a store clerk and eating in cheap restaurants before returning to their lair to further abuse their captives, which still have yet to have any backstory explained. The woman proceeds to abuse the prisoners, leading to disgusting footage of a chunky emo girl laughing and puking on two other chunky crying emo girls. Forget gore, this is the most disturbing aspect of this film and will probably be a lifetime boner-kill to everyone but the actors involved. Oh yes, and now there is another man in the video, who we see brief glimpses of as the camera is passed around. This goes on for around twenty minutes until the dark haired fat chick is disemboweled, and the light haired fat chick is suffocated and beaten. The scene ends with one of the men having sex with the stomach wound of the recently dispatched dark haired woman.

There is quite a bit of cinematic body exploration in the middle of the movie, from the men showing their tiny, flaccid penises to the woman rubbing her pussy on everything within reach and playing with one man's toes. And not surprisingly the filmmakers don't miss the opportunity to show off their musical skills, you know, since they are making a movie that no one but me will watch. And can you guess what kind of music they play? If you guessed "incompetent death metal" then you get a cookie!

We are then treated to disjointed scenes of the group getting piercings and having fake fistfights, punctuated by additional close up shots of them flashing their genitals. The off-putting woman seems to have an amazing talent of vomiting on command, and they take the camera on a tour of their home which is by now littered with rotting body parts. These people must know someone with actual skill in prop making, as the body parts are passable effects considering that the quality of the film leads you to expect paper mache or something equally cheap.

Tragically the group suffers from increased infighting, resulting in more shrill screaming and hilarious arguments before ending abruptly with the insinuation that they all killed each other. The end is quite welcome, as is the implied death of all characters involved since they are not developed into any kind of story and inspire no emotions other than contempt and pity. To say it was pointless would be an understatement.

Now I feel like I should offer a brief warning for this movie, as if you intend on watching it you will have to put up with some of the most annoying performances ever captured on film. The female lead shrieks constantly, the male leads giggle like retards, and there is an overwhelming odor of chubby, unwashed emo throughout. Make no mistakes, this movie was made for the expressed purposes of shock value and overall it tries WAY too hard. I suppose that when the "filmmakers" finished this work they were pretty convinced they had produced one of the most shocking movies of all time. But all they had done, in my opinion, is create an unwatchable, poorly edited, steaming pile of shaky camerawork filled with self indulgence. It is clear that a group of social reject friends got together and decided that instead of cutting themselves and writing shitty poetry they should make a movie.

From what I have read there was a decent amount of uproar following the release of this film as many thought they were watching genuine torture-porn, but from what I can tell this is mostly because the acting and camerawork are so terrible that many might conclude that it must be genuine. Bravo, shitty producers. Bravo. Overall I would say that these people tried so hard to be dark and "edgy" that it is like Marilyn Manson and Criss Angel had a baby, got it addicted to meth, beat it into retardation, then filmed it's dreams.  But in a hilariously bad way. I fucking hated this movie, but unfortunately I downloaded two others by these filmmakers already so I might as well review them in a future installment of Films For Fiends.