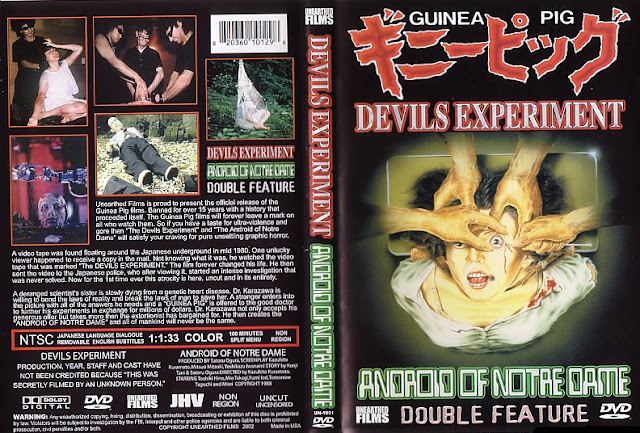 Welcome one and all to another installment of Films For Fiends, where I, Hamtackle, review the most foul, violent, and disturbing films of all time. Tonight I bring you Guinea Pig: The Devil's Experiment by Satoru Ogura. This is a somewhat legendary film that was released in 1985, and it was rumored to be a re-enactment of a snuff film that was sent to the director. He apparently watched it before sending it to the Tokyo police, but it dominated his thoughts until he reproduced it for our viewing pleasure. It consists of very little plot and a whole lot of brutal torture, and gave rise to the term "gorno". So let's see if it's worth a violence boner.


The film is only 43 minutes long, and centers around a group of three guys who decide to carry out a horrible experiment. They will capture a random woman and torture her until she decides to accept death, then send the results to the police. Charming, I know. It is all shot very amateurish to add to it's authenticity, and begins with a clean-cut lady tied to a chair being slapped repeatedly by her captors. They dip their hands in water and coat them in salt for further brutal effect, and beat her mercilessly with a coin-filled sock. The only saving grace to the disturbing scene is that it is clearly fake, and the woman takes the beating like a champ.


I imagine this might be where most real women would check out in real life, but this tough gal endures a three man texas-style boot party followed by a thorough pinching administered by pliers without appearing very impressed. The thugs take her toughness as a challenge, but again fail to break her when they inexplicably decide to spin her in an office chair to the point of unconsciousness, then force feed her liquor. Not much of a torture if you ask me. I did this same thing to myself two weeks ago.


Moving on to psychological torture, the men play computerized static to her through headphones for twenty hours until she screams like a banshee then appears to go comatose. But still she persists. It is at this point that they ratchet up the violence, tearing out patches of her hair and peeling away her fingernails. For me it would be at this point that I request a bullet, but not her. I am starting to like this lady.


Now the men liberally apply scalding cooking oil to her tender bits, starting with the inside flesh of her arms, to sizzling effect. Cue the maggots. The foul worms are applied to her burns and go to town on the necrotic flesh, although the girl seems too out of it to properly digest the horror of the situation. Strangely, the captors then decide to giggle like retards while they throw rotting meat at their prisoner. Entertaining? Yes. Torture? No.


But then the trio begins to truly test her bounds. They cut her hands with a scalpel and batter them with a hammer in what is actually a pretty convincing special effect, and then shove a needle through the side of her head and out her retina. Talk about escalating the situation. The film ends rather abruptly with a shot of the dead woman suspended in some kind of net.


So overall, how was it? I spent most of this film wondering what all the fuss was about. The majority of the torture is rather mundane and not particularly disturbing, but the ambiance and tone of it is quite menacing and downright mean. But the gouging of the eye was definitely cringe-worthy, even for someone as desensitized as myself. Overall I felt like I was cheated out of the gruesome promises the film made on the internet, probably mostly due to the acting of the victim. I am a big fan of japanese gore films, and they are generally much more inventive and unconventional than american slasher flicks, but the stoic submissiveness of the japanese woman lends itself better to pornography than torture, I guess. At least it avoids the transparently dishonest attempt at redeeming morality that tarnishes films like Cannibal Holocaust, although it is more likely to lull a gore-hound to sleep than inspire frantic masturbation. But I understand there are like six other brutal short films in the Guinea Pig franchise, so perhaps they will still live up to my expectations, assuming I can track them down. Until then, my blood lust will be left wanting.