The worst thing about Obamacare 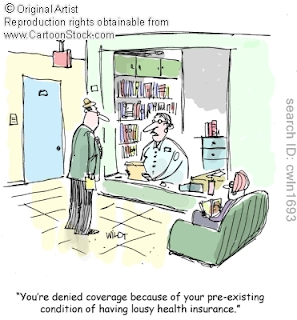 I have a major gripe about the health care reform bill that was championed by our current President, Barack Obama.  It has a major flaw that prevents it from being effective.  The problem with Obamacare is... no public option.

I am very thankful for some of the other parts of the bill, like the ones that reduce the options that the insurance companies have to rape the consumer.  Stopping the exclusion of people for preexisting conditions, ending lifetime limits, etc.  It's like they can still rape us, but they don't get to give us a moneyshot at the end.  But adding a personal mandate without a public option to control costs does nothing to make health care more affordable, and the only net reduction would come from the overall savings within the system generated by eliminating the need for people to use the emergency room as their primary care.

On the subject of lifetime limits, I heard a ridiculous story about an old man and his ailing wife.  She had cancer, and had reached the end of the lifetime limit on her husband's meager health insurance policy he got from the company he did maintenance for.  She was going to need life long support for what time she had left, and the insurance company was telling them to fuck off and stop calling.  Their doctor gave them a choice:  The husband could either quit the job he worked at for thirty years, or he could divorce his wife of fifty years.  One way or another they needed their income to drop low enough to get public health assistance.  If he quit they would have a joint income low enough, or if she was unmarried and jobless she could qualify by herself.  That story makes me want to set a building on fire.

Now as for the personal mandate bit, the most controversial portion of the bill, everyone needs to calm down.  This is not a breach of constitutional authority, or some crazy socialist agenda.  In fact, if you are against the mandate you are a SOCIALIST.  Did that blow your mind?  If you think this thing out you realize quickly that we live in a society that will never deny life-saving care to anyone that comes into a hospital, and those without health care end up burdening society by covering costs.  So by being against a personal mandate you are for socialized medicine.  What a dilemma.

Many people insist that it is like car insurance.  This is a poor analogy.  You can make a choice not to drive, thus preventing the need for car insurance, but you cannot make a choice to be healthy.  Accidents, genetic disorders, and disease can strike you no matter how well you live.  We all must prepare for this eventuality, because I think the only thing more horrible than getting sick would be burdening my family.  Then again, there are a lot of assholes in my family...
Posted by Hamtackle at 7/09/2011 10:09:00 PM