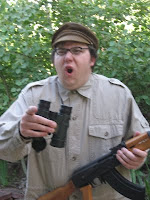 Editor's note: Prof. Ted Gunderson is a world renowned Cryptozoologist, cuisinier, huntsman, fundamentalist christian and vitriolic Republican. His journal of political thought and mythical cuisine is published out of his garage.

Santa Fe, NM - When I heard the news I knew it to be false. The Amy Winehorse (Equus crapula eructo) dead? HA! What a steaming crock of splatter shits! You can't kill the Winehorse with mere piles of cocaine and buckets of booze. Everyone knows the only way to kill a Winehorse is with a diamond axe anointed with dragon venom. I, of course, have the axe but I am fresh out of dragon bladder from whence to squeeze the venom. Believe you me, dragon meats and bi-products have been harder and harder to find since people started investing in dragon gold. Killing dragons can destabilize the Hoarded Gold market. It is a sound investment though. I can proudly say that I have made quite a profit with my stock market shenanigans. Thanks Glenn Beck.

I am in Santa Fe on business and did not expect to encounter the Winehorse so far from it's natural environment. I was taking a leak in an alley when I saw her. She was towards the end of the alley pawing at the ground in front of a small, surly hobo (Homo vulgivagus). The Hobo dipped a paper bag in kerosine and placed it over the Winehorse's muzzle. The Winehorse then threw back its head and began to breath deeply, whinnying madly. The hobo began to slowly stroke the Winehorses bouffant. The courtship ritual complete, the pair began their awkward coupling. The hobo positioned a plastic milk crate behind the Winehorse's rear quarters. The hobo stood atop the crate and began to hock and spit on the Winehorse's aroused and reeking rear end. Then, roughly gripping the Winehorse's slack thigh skin, the squat, smelly man thrusted and began the forcible ingress. 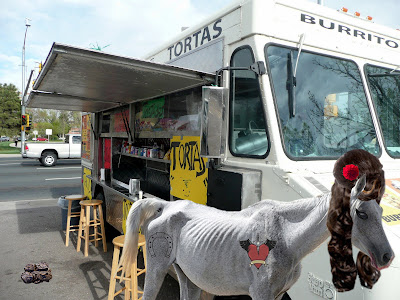 Minutes later, his package delivered, the hobo withdrew and wandered downtown away from his momentary lover. The Winehorse, famished from her rutting, left the alley in search of sustenance. She trailed an almost audible stench back to it's source, "Juan's Beefy Fistfull Burrito Hole". I watched the beast feed on an "El Carne Grande Exsplosivo Burrito" and snapped this picture. The flash spooked her and she quickly galloped away. It was a one in a million encounter and an almost religious experience. I know God is most proud of this wondrous creation. I only hope next time I encounter the Winehorse, I have a bit of dragon venom within reach. I have a recipe for broasted Winehorse that I have been dying to try.
Ciao and Godspeed -Prof. T. Gunderson
Posted by Terlet at 7/24/2011 10:30:00 PM