I Smurfed in my pants! 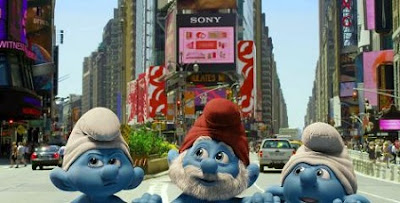 In only 8 days, all of humanity will be granted the gift of the first CG Smurfs movie. I say "first" because a trilogy is already planned. I have seen some previews and I must say, it looks phenomenal. Clumsy Smurf falls in a toilet, they ride subways, tickle Neil Patrick Harris and they get to play Guitar Hero. Ha! A Smurf fell into Doogie's cereal! Ha! He was going to eat that cereal! What the fuck else could America hope for. If Smurfette accidentally pops out a titty and says something like "Oh! My Smurfbags!"..... highest .... grossing.... movie...... EVER.

Seeing all this Smurf Hullabaloo got me thinking. If Smurfs were in the real world, how do they reproduce? They have to somehow. Somebody has got to be sticking a tiny blue something into some sort of moist and eager receptacle. 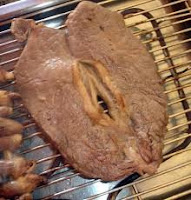 That is some hot Smurf
The Smurf village is populated entirely by male Smurfs. What about Smurfette, you say? As everyone knows, Gargamel created Smurfette. He made her for the sole purpose of luring the Smurfs into a sexually frustrated frenzy so they would be easier to catch. She is a trap. A literal trap. There is a shriveled Smurf penis under that dress. Smurfette may appear to be a female Smurf, but I consider her to be transgender. Most Smurfs names reflect their occupation. Smurfette should really called “Tranny Smurf”. 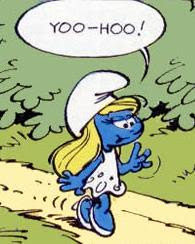 It's a trap!
During the decades that Gargamel spent searching for Smurfs He has only encountered the common surface dwelling worker Smurf. He had no idea what an actual female Smurf looked like. He never learned of the real Smurfciety that existed just below his feet. I theorize that Smurfs' existence is much like that of an ant colony. A Smurf colony.

A Smurf colony is an underground city where most Smurfs live, eat, defecate and die. The colonies are made up of a series of underground chambers. The chambers are connected to each other by small tunnels. There is a trap door in every Smurf's house concealing an entrance. Below, there are rooms for smurfberry storage, tiny white cap and tights production, living quarters and the vast majority is taken up by the gem of the colony, the Queen. 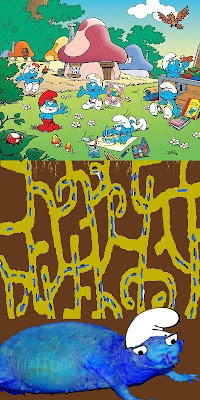 Smurfs are eusocial, like ants, bees, wasps and termites. Smurfs have one reproductive queen and rest are worker males, except for one "King", the Papa Smurf. The Papa is the only Smurf who has access to the room where the Queen's vagina is kept. Like an ant colony, the Queen is enormous. If a standard Smurf is 3 apples high, she is around 8 watermelons long. A huge, wriggling, blue mess of a beast. Following Smurf logic, her name is most likely Breeder Smurf or Orgasm-Hole Smurf.

Like an ant or bee colony the Queen only produces worker Smurfs. Each worker Smurf has a specific function and if (for example) Brainy Smurf were to die, she can quickly produce another Brainy Smurf to fill the niche. Any Smurfs that have been lost or are no longer fulfilling their intended function are replaced with identical duplicates by the Queen. Jokey Smurf is almost always violently murdered and requiring replacement.

Hidden inside Papa Smurf's ceremonial Red pants is the key to the "Smurfing Room". It is where Papa Smurf goes to get Smurfed. Mating with the queen is almost exactly like a glory hole. Her girth fills the room. Papa just has to sidle up the gaping, flexing, steaming hole and insert the nub on his lower back (it's not a tail) and Voila! Smurfgasm. The Queen can store sperm for months so the Papa only needs to deposit his seed once a year. Even so, he is in the Smurfing Room all the time. A new Papa is chosen once a Papa Smurf's beard and hair start to grow long, The hair lengthening is a sign that the Papa has reached the end of his breeding days and is becoming sterile. The colony is thrown into complete anarchy. A pheromone is released and every Smurf fights to the death. The battles last for days. Every Smurf driven to a feral rage using his teeth and claws as tools of animalistic murder. The carnage continues until only one Smurf is left standing, bathed in the blood of his brothers.

The surviving Smurf becomes the new Papa. The old Papa hands over his ceremonial Red tights and dons a pair of yellow tights becoming the Grandpa Smurf. (He can still live in the village but has no power or responsibilities. He is shunned by all.) A white beard immediately starts to grow on the new Papa's face (a sign of sexual maturity). He reaches into the red tights and pulls out the key to the breeding room. When the new Papa enters, the Queen quickly expels all of the previous Papa's sperm (she can hold a lot). Once the room is cleaned, he mates with the queen and she begins to repopulate the entire village just as it was before. It is a cycle that the colony goes through every few years. Get rid of the old stock and replace it with the new Papa's genetic material. That is why all Smurfs but Papa and Grandpa are the same age. 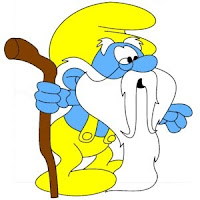 I hope this was helpful. I plan to continue my study of Smurfology and Smurflosiphy. There are still many treasures to be discovered. Remember, if you ever see a Smurf, don't fucking touch it! They are disgusting creatures and the cause for 23% of new herpes cases each year. That is a motherfucking FACT!

I found a herpe!