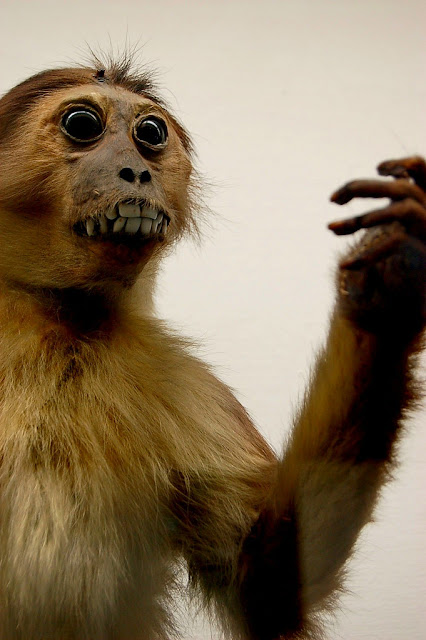 But while Melvin looked the same as the other boy monkeys he was very different inside. Melvin knew he would never belong with the boy monkeys, and grew to resent his mother and father for not making him a girl. He wanted very badly to be a girl monkey, and since he was little he tried to be one.

He tried to groom his fur to look very short, and darkened it with mud. But he still didn't look right. It was his tail. Melvin found the sharpest rock in the forest and cut the end of his tail off. It was very painful, and made him bleed and bleed. But he was so very happy, because now he could go live with the girl monkeys. Melvin climbed the big tree at the edge of the cocoabrush woods, where all the girl monkeys lived, and happily presented himself to them.

The girl monkeys all laughed. "You can't make yourself a girl monkey! You are far too big to be a girl. Did you cut your tail off? How awful!" One of the girl monkeys said. "Look girls, look at his muddy fur and bloody tail! What a disgusting boy monkey!" The girl monkeys were all laughing so hard that they fell down and were nearly falling off their branches.

Melvin thought about the boy monkeys. They would never let him come live with them with his short tail. And the girl monkeys thought he was a sad joke, and didn't want him to live with them either. He saw red.

Melvin let out a savage scream and bore his teeth to the girl monkeys. They all stopped laughing. He grabbed the nearest girl monkey and pulled both her arms off, screaming angrily as he tore her apart. One by one Melvin attacked the girl monkeys, throwing some down to the hard forest floor below, and ripping some into pieces where they stood. He was much larger than the girl monkeys, and was so angry that he killed all the girls, even his own mother.

The boy monkeys had all gathered at the base of the girls' tree, watching in horror as their mangled corpses rained down to the floor of the cocoabrush woods. The monkeys had never seen hate before, and were all shocked in horror. And after the last girl monkey had been killed, and her body thrown to the foliage below, the boy monkeys heard a loud cry.

Melvin never came down from the girl monkey's tree. He just cried and cried until he eventually starved. The boy monkeys went on living their lives, hardened by the carnage they witnessed that day. But there were no girl monkeys to mate with anymore, so there were no more baby monkeys. In time the entire society of monkeys died off, leaving nothing but a pile of monkey bones in the forest. It was almost as if the monkey society never existed.

We could all learn a lot from Melvin the monkey. Respect the LGBT community, because if you don't they might tear us all to pieces and destroy our society.