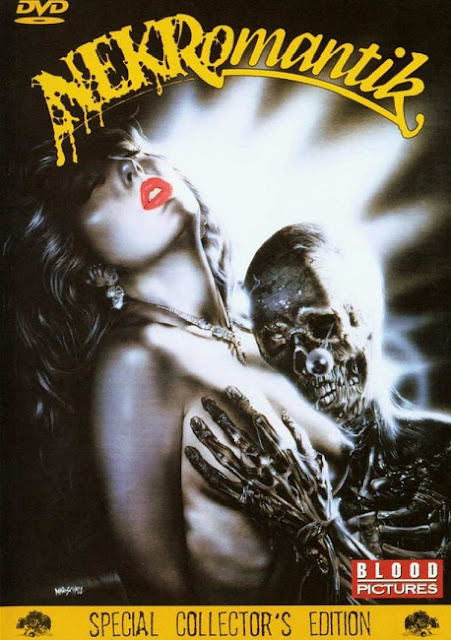 In an effort to further my obsession with all things depraved I have been trying to see the most foul and disturbing films of all time. Tonight I review the 1987 West German cult classic, Nekromatik. This is another flick that was considered distasteful enough to warrant being banned in several countries due to it's depiction of graphic violence and necrophilia.

The plot centers on a young man named Rob who works in Germany for a company called Joe's Cleaning, which specializes in the removal of bodies from horrible accidents. He lives in a small apartment with his girlfriend Betty, who shares in his horribly violent fantasies. We are introduced to Rob when his team arrives in a van to clean up a car wreck, and they pick up the various pieces of corpses and place them into bags. After a long day's work Rob returns home with a few keepsakes to add to a collection of body parts in jars, and carefully deposits an eye and heart into their own receptacles. We then see his girlfriend Betty, who is currently bathing in a tub of human blood.

Rob daydreams about a rabbit being slaughtered, which is shown on screen (with a live rabbit, I guess to maintain artistic integrity) and likens it to a human autopsy. But he is about to take his fantasies further when a new opportunity arises. A man is accidentally shot by a neighbor and the body is dumped in a pond, decaying badly before the cleanup crew is called. Rob decides to steal the corpse instead of disposing of it, and returns home to present the prize to his girlfriend. She is clearly pleased and immediately explores the corpse's junk, which must not be up to par since she channels her inner MacGuyver and fashions a dong out of a condom covered pipe that she embeds in it's decaying groin. But don't get the wrong idea, this is all very tastefully filmed, particularly the part where she licks it's hanging eyeball while Rob makes out with it. The whole thing is hilariously paired with a romantic piano sonata, making it the classiest necrophilic three-way I have ever seen.

While Rob works all day Betty begins forming a deeper relationship with the body, laying in bed and fornicating with it, even reading romance novels to it. But after Rob is unceremoniously fired for leaving his bloody clothes in a locker to fester, Betty is visibly upset and takes the first opportunity of Rob's absence to steal the corpse and leave him. Rob takes the most logical course of action, which is to put their beloved house cat in a plastic bag and beat it to death. He then bathes with the cat's blood and entrails. Thankfully the slaughter of the cat is clearly fake, unlike the slaughter of the rabbit seen earlier.

In an attempt to forget about his woes Rob goes to see a horror film, but ends up leaving the theater unsatisfied with the movie as his tastes have clearly progressed beyond what the rest of the world considers "shocking". He goes home and attempts to kill himself with an overdose of pills and booze, but is ultimately unsuccessful but has a graphic dream of being undead and having a woman present him with a decomposing human head... cue the romantic piano as the two gleefully toss the head back and forth and prance through a field.

When he awakens to find he has failed in his suicide attempt, Rob travels to a seedy part of town to procure a prostitute, who he takes to a stereotypically foggy cemetery to strangle and then posthumously rape after he has trouble getting an erection. He falls asleep until awakened in the morning by an elderly gravedigger, whom Rob attacks and decapitates with his own shovel.

Faced with this irreconcilable chain of events, Rob decides to attempt suicide again with strengthened resolve, and repeatedly stabs himself in the stomach while an obviously fake penis fires a comical amount of semen and blood into the air. All this while the cheesy piano plays in the background, and cut scenes of the rabbit being slaughtered are shown in reverse, making a funny attempt to add an artistic edge signifying that Rob's death is, in reality, his birth. The final scene shows Rob's grave, and the film ends with a woman thrusting a shovel into the earth to dig him up. Although you only see her feet, one can only assume it is Betty coming to claim her former lover.

I must say that I liked this film despite it's sub-par effects and hilarious pairing of piano with scenes of violence. And although the theme of necrophilia is certainly disturbing, and I have a serious distaste for any depiction of animal abuse, there is something charming about the character of Rob who is far from an all powerful killer with no conscience. Indeed he is a rather pathetic miscreant who is at the mercy of his demented mind, and has no one to share his life with once Betty rejects him in favor of a dead guy with a steel pipe makeshift wiener. Check it out if you are the type of person who can get a chuckle out of cheesy horror films from the vintage era of the mid '70's to the mid '80's.