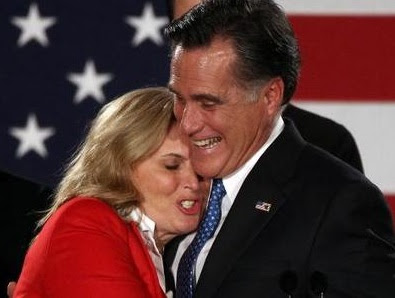 Mitt let the heavy oak door close behind him, exhausted after a long day of private jets, rehearsed speech, and routine dishonesty. He had been building a public persona for years now and was just a few short months from reaping the rewards of his effort, but found that he had increasing appreciation for the few days every month that he was able to get back home to one of his beloved estates. The house smelled of pristine pinewood and sterile leather, clear hallmarks of Consuela's labor. Mitt smiled naturally for the first time in months at the thought of his mexican housekeeper working frantically in anticipation of his judging inspection of the property.

As he poured himself a stiff glass of milk to wind down after the long campaign trail week a buzzing alerted him to a notice on his blackberry. Drinking deeply as he read the calendar event his smile stretched across his face once again as he realized that tonight was the first of a pre-arranged six agreed upon romantic encounters with Ann that they mutually scheduled during a husband/wife mediation session just two months ago. It excited him to know that somewhere in the house Ann laid in wait, fully clothed and eager to put her womanly commitment behind her.

Mitt took off two of his jackets and cast them to the floor, knowing full well that Consuela would have them cleaned and pressed within the hour, and draped his final jacket over his forearm as he marched down several hallways to the heart of the compound. As he opened the large double doors to the master suite he was greeted by the image of his post-menopausal conquest, sitting at the opposite edge of a double-king sized bed, staring longingly out a locked reinforced glass window. She looked like an angel clad only in her delicate full-body holy undergarments.

"Let's get this over with" She said without turning to meet his gaze "we have a lot of praying to do after, and I'm exhausted." She always knew what to say to get him nearly erect.

He made a show of disrobing for her, and knew she appreciated the effort despite her refusal to look at him. The ritual was a formality now that she was unable to bear children, and her unwillingness to give herself over for unproductive pleasure only made the act more hot for Mitt. Getting what he wanted from a reluctant party was how he made his living, and now it was how he made his loving, too. Now down to nothing but his cotton vestments and socks, he crawled over the vast real estate of the bed as Ann rolled onto her back with legs spread wide, pulling apart the flap of cotton at her groin and exposing the pale dryness beneath. Mitt took a moment to gaze at the rare glimpse of unshaven hair that formed a halo around his target like the medieval-era haircut of a friar, and met her eyes as he pulled a partially turgid member from inside his magical underpants.

He took his place at her ankles, kneeling with four inches of hot flesh in his hands, and used his index finger as a splint to wedge his penis in her warmth. Her disinterested grunt rang notice of his success as he fell upon her, thrusting an arrhythmic dance atop her motionless body.

He went on for literally minutes, unsuccessfully convincing her to shift her backside to the left until a bead of sweat formed at his brow. In a moment of sheer panic at the thought of ruining his finely-sculpted hair he uttered a few passionate but quiet howls, determined to convince her that he managed to copulate with her to fruitful conclusion for the first time in many years before slumping over her and kissing at her neck until she pulled back in disgust. His now limp penis has pressed against the cotton-covered surface of her thigh, having been unknowingly dislodged at some point during the act. Mitt silently folded it back into his underwear and proceeded to the vast marble sanctuary of the restroom to wash the shame from his loins, leaving Ann to commence her repentant prayer alone.

When he returned he nodded his approval at her cooperation in the act, then retired to his own room triumphantly, encouraged by the thought of his next opportunity to attempt the act next month. One day, when he was president, she would relent and allow him to try it the forbidden way. Indeed, the first night they shared a bed in the White House he would get what he always wanted. Ann would be on top.