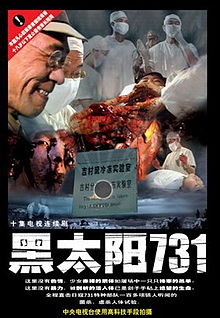 It's time for another installment of Films for Fiends, my attempt to view and review the most horrifying videos of all time... you know, so you don't have to. Tonight I will detail the 1988 shock horror classic The Men Behind The Sun which detail the WWII atrocities committed by the Japanese at the dubious Unit 731 facility. The film is directed by Mou Tun-fei and runs about 105 mins.

It is first necessary to admit that this film, while presented as a factual account of the happenings located at Unit 731 during wartime, is directed by a Chinese man and has some elements of an exploitation film. But it is certainly not hard to imagine that the Japanese were involved in atrocious medical testing that mirrored the horrible experiments of Dr. Josef Mengele, as the Japanese were allied with the Nazis at the time. The director received criticism and even death threats from Japanese citizens after the film's release, and it is banned in several countries.

The plot follows a group of children who are sent to the frozen backdrop of Unit 731, based in what is now Northeast China, as recruits to participate in experimentation on Chinese citizens for the purposes of creating new and powerful biological weapons. For the first third of the film we see the children adapting to life on the base and learning the Unit 731 style of harsh discipline. The children play with a deaf-mute Chinese boy that lives in the surrounding area, and get into trouble for playing with a red ball. It is clear their commanding officers are trying to toughen them up.

The children are slowly exposed to the horror of the medical experiments that are being undertaken. They are taught to think of the Chinese as non-humans, and are forced to beat them as part of their indoctrination. In one horrible scene a Chinese woman is forced to stand in the snow with her arms extended while a guard pours cold water over them, stopping only to break the long icicles from her forearms. The torture lasts for over ten hours until she is taken into a room in front of the children, forced to dip her frozen arms in boiling water (which seemingly causes no pain due to the death of her tissue) and a "scientist" grabs her forearms and rips all the flesh from them in one smooth motion.

The disturbing experiments include throwing a live cat in a room full of ravenous rats to be torn to shreds, tying live subjects to crucifixes for the purposes of target practice, the use of pressure chambers to kill people by causing their intestines to vacate their orifices, and live dissections of human subjects to ensure "freshness" of harvested organs. Their efforts are focused on developing a ceramic bomb containing fleas infected with a brutal strain of bubonic plague to be used in the fight agains the allies in the war.

But the children become disillusioned with the experiments when one boy witnesses the live dissection of the deaf-mute boy, which was controversial for the use of a genuine child's corpse in the scene, complete with still-beating heart. Soon after, the tides of war turn against the Japanese and they are forced to abandon Unit 731, leaving the facility burning as to hide the terror of their experiments. In the final scene the fleeing Japanese troops weed out a disguised Chinese boy in their midst, and impale him with a length of pipe, spraying blood across a Japanese flag in a rather cheesy image of pure propaganda.

The film is mostly shocking for the use of actual human remains, and two scenes of animal torture where the cat is fed to live rats and the rats are later set on fire. While these scenes are designed to add to the sense of horror, they ultimately discredit it as shock cinema and prevent it's message from being absorbed by the wider world audience.

I would say that personally I found this film to be less shocking than I had hoped, but I enjoyed some of it's creativity in death scenes. It is also not without it's humorous moments. I particularly enjoyed the character of one crazy old man that was tasked with continually feeding an incinerator with pieces of corpses. He is forcibly dragged out of the facility while it is burning at the end, laughing wildly. It reminds me somewhat of Faces of Death with a plotline, where scenes of real violence and gore are punctuated by obvious cheap special effects, and the grainy film gives it a dark ambiance. This film sparked my interest in the history of Unit 731, and I plan on watching the recent documentary film Philosophy of a Knife to further my knowledge on the subject.

So there you have it, another disturbing film review down. Next week I will be watching the foreign film Nekromantik for your reading pleasure. Until then, sweet dreams!