A One Legged Vagrant's Guide To The Movies: The Revengers 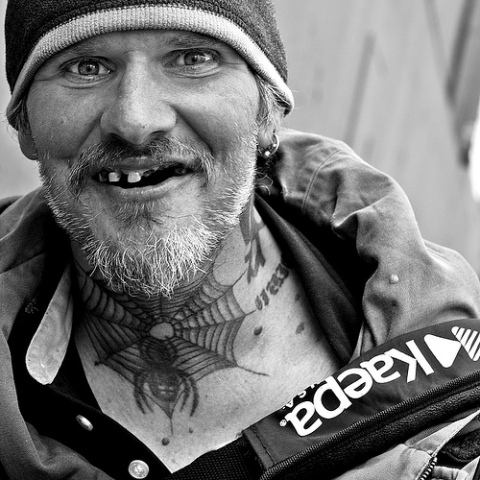 Hey there, movie people. It's me, Frisky Pete! Sorry I haven't been making movie writings for a while, but I have been spending most of my time at the free clinic getting critters scraped out of my leg wound. Having only one leg is real tough, especially if it keeps getting infected and smells like cheese all the time.

I was able to sneak into the movie house the other day and see the new Revengers movie. They said it was in 3D but all I saw was blurry. I bet the other people in the movie house only saw blurry too, since they all had to put on their glasses to see it right. I can't afford any glasses to see good. But I did get lucky because I spent the first ten minutes after the lights went out going through the trash cans by the door, and they hadn't cleaned them out from the previous movie! I got bunches of popcorn but most of it was wet and sticky with pop, but tasted way better than the dogfood in my pocket that I snuck in with me!

The movie had a bunch of really powerful people breaking things a lot, and there was one that I really thought was cool. He was a big green man that yelled and broke everything in his way. I spent most of the movie waiting for him to start raping everyone in the movie, but he never did. That made me think the movie was not very realistic, since anyone that was that strong would definitely rape everyone he ran into. There was another guy that was red and had rocket feet, and another that had a really big hammer, like a super carpenter or something. But none of them were as neat as the giant green dude that wasn't raping anybody.

I got pretty confused at what was happening in this movie, mostly since all the bright flashing lights kept giving me seizures. Every time my seizure stopped people were clapping in the movie house, so I felt pretty good that they were happy I was ok. Luckily I peed when I was having a seizure so I didn't have to go to the bathroom and risk getting thrown out like what happened to me last time. The movie house people are mean because they always seem to know that I don't have a ticket, even before I start running away from them.

But in the end of the movie all the powerful people killed a bunch of flying insect men and then the movie ended. When everyone was leaving the movie I followed a woman who was walking, and when she got home I reached through her window and took her cat. It's a real good cat but it has only been two days and it's eye is already swollen shut. If I can remember where she lives I might give it back and try to take another person's cat. One without gross eye problems.

But now I am back at the clinic and getting my bandage replaced. This clinic is better than the other ones because they don't have any stairs to hop up, and the one lady that scraped my leg last time is really nice, and has a big house with two cats inside it. I asked her about the cats but she got really weird and now she doesn't come into the clinic anymore. Maybe I'll stop by her house to talk about her cats. Maybe she wants to trade for a cat that has only one good eye.

If my leg gets better I am going to go to another movie soon, but I don't know which one. I guess it doesn't matter, since I mostly only go there to stare at people and eat popcorn and candy. See you again sometime soon, internet people!