Samuel the Salamander lived in the boggy part of the forest, beneath a great hollow log.  There were animals all about, playing and carrying on, but Samuel did not play with them.  Samuel was always hungry, and no matter how much he ate he could never stop his hunger.
The other animals did not notice when the little creatures disappeared, and nobody suspected that Samuel was involved.  Whenever they looked into his eyes they seemed blank… and happy.  Samuel’s eyes were very pretty.  And they could make the animals do things like stay still and quiet when they wanted to scream and run.
Salamanders are not scary.  They have no teeth, and are not aggressive to other animals.  They just stay where it is dark and moist, and usually eat only worms.  But Samuel is different.  He found out he can eat anything, no matter how big it is.  He started eating the field mice, and they were very tasty.  Then he ate a bird, and then a squirrel.  After eating a big juicy rabbit Samuel thought he finally satisfied his hunger.  But it came back.  He would need to eat something really big to stop being so hungry.
But in Samuel’s forest there are not many big things.  The deer don’t come into the boggy part of the forest, since their feet sink too far into the mud.  But sometimes people come.  The people come to make the fish swallow hooks, a terrible way to go.  They catch the toads and frogs, and sometimes they take salamanders.  Samuel isn’t sure what happens to the animals when the people take them, but he didn’t want to find out.
One day Samuel was sitting in his favorite spot under the great hollow log, trying not to think about his growing hunger.  There was a loud rumbling, and the log began to move.  The light was blinding to Samuel.  He felt very exposed, and in danger.  A faceless beast with five heads bore down on him, and Samuel had only one option. 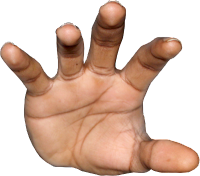 It took him hours to devour his assailant, centimeter by centimeter.  By the time he was finished, all the forest animals had gathered around.  They cheered for Samuel and lifted him on their shoulders.  He had eliminated the human threat in the boggy part of the forest!  None of the animals figured out that Samuel was causing the disappearance of the animals too, they all just assumed the people were behind it.  Everyone was as happy as could be, including Samuel.  His hunger was gone and replaced with a pleasant satisfaction.  It felt so good that Samuel hoped it would never go away, but then his stomach growled…
Posted by Hamtackle at 8/23/2011 07:09:00 PM