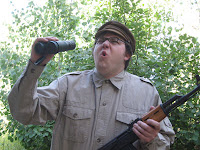 Editor's note: Prof. Ted Gunderson is a world renowned Cryptozoologist, cuisinier, huntsman, fundamentalist Christian and vitriolic Republican. His journal of political thought and mythical cuisine is published out of his garage.

Atlantic City, NJ - After a full week of trailing the elusive beast across the county I finally found her.  The Amy Winehorse (Equus crapula eructo) had taken refuge inside a noisy discotheque.  The surly swaying creature was in need of sustenance..  This was a rare opportunity to observe a much talked about but never before recorded ritual.  The Winehorse wandered the dark, smoke filled outskirts of the dance floor, it's nostrils flaring as it desperately searches.  Suddenly, the Winehorse jerks up its head and stares at a neighboring booth of guidos and mooks.  Upon their table is her quarry.  She begins to foam and drool from her muzzle.  The spray- tanned man-boys stood aghast as the Winehorse confidently  approached the table and it's nostrils wide and hungry, snorted all of their cocaine.


The bros, fueled by testosterone and pent up sexual confusion, went ballistic.  One immediately smashed a chair on the bony back of the Winehorse.  The Winehorse insane with pain and cocaine, spun around and started kicking and bucking like a bronco with an anus full of fire ants.  One after another the bleach blond Pseodo-Adonises were brutalized.  Sharpened horseshoes sliced flesh and cracked bone.  The Winehorse had something special for the one who hit her with the chair.  First she hobbled him with a knee kick then she proceeded to stomp and kick him until his face looked like a bowl full of his mother's marinara.
The Winehorse, satisfied from the ample amounts of cocaine and violence was able to finally relax.  She listened to the thumping music and began endlessly smoking pack after pack of cigarettes.  She may remain here for many days to rejuvenate.  I must stay out of her way as to not interfere with her natural routine.  It is very important that I remain unobtrusive in my study of this greasy, reeking quadruped.

I have many days of food and water in my pack and I have a straight razor to keep the guidos and guidettes away from my camo photography blind.  It may take slicing the nose off one or two of those cocky fucks before they leave my camp alone.  I will live inside the discotheque observing the Winehorse until it is ready to migrate on.  The Winehorse truly is a miraculous and disgusting creature.  Thank God for not yet smiting this tattooed, bouffant laden monstrosity.
Ciao and Godspeed -Prof. T. Gunderson
Posted by Terlet at 8/07/2011 11:58:00 PM